Dr. Lewis To Work With NSIP

Dr. Ron Lewis has been working most of his life to make sheep better.
Currently Professor of Animal Breeding and Genomics at the University of Nebraska–Lincoln, he brings a lifetime of education and experience to the mission of improving the quality and profitability of sheep through quantitative genetics.

On June 1, he expanded his résumé to include Technical Advisor for the National Sheep Improvement Program. Lewis started life as a city boy in Southern California. 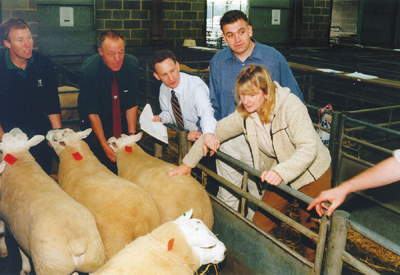 “There were horses and cattle nearby,” he says, “but I didn’t become engaged with sheep until I went to University of California, Davis.”

He met up with Dr. Eric Bradford there and began work at the Hopland Field Station, and then as a student shepherd at the UC Davis sheep unit.

“Dr. Bradford was very patient,” says Lewis. “I worked with the year-round lambing program, with ewes lambing on a daily basis. It was eye-opening, but I learned what to look for, learned record-keeping, and learned how to handle prolific animals.”

He was in the midst of making a decision whether or not to continue into higher education when he met Dr. Maurice Shelton of Texas A&M at a regional sheep meeting in Sacramento. They spoke briefly, and Lewis returned to Davis to complete his degree. He heard nothing more until a letter with a job offer arrived.

“Then I took a chance,” says Lewis. It was January of 1981 when he got into his car and headed east to San Angelo to take a staff position at Texas A&M’s Agricultural Experiment Station. “I had no idea what I was getting into. But the experience made me what I am today. What I didn’t know, Dr. Shelton certainly did.”

He learned computing skills, data recording and evaluation, while assisting with the Rambouillet and Angora performance tests. He learned of wool, mohair and industry needs. He spent six years with A&M, and earned his master’s degree along the way.

“It was during our regular morning chat when Dr. Shelton and I first discussed whether I should stay and remain as his technician long-term, or move on and earn my Ph.D.,” says Lewis. “I thought hard. I very much enjoyed working for Dr. Shelton, and what I was doing.”

But continuing his education would mean the opportunity to develop professionally and to establish his own research program. It would also ultimately mean taking on administrative roles with days of budgets and funding. He ultimately chose to continue his studies, and found himself working under the mentorship of Dr. Dave Notter at Virginia Tech on accelerated lambing programs, writing his dissertation in quantitative genetics and taking on classroom duties.

Now what?
“Then it was time to get a proper job,” Lewis recalls. He found himself in the southwest corner of Western Australia, in Katanning, a place he describes as “not quite Outback desert,” working as a geneticist for the Western Australian Department of Agriculture.

Focusing on wool, he worked to improve wool quality in primarily fine-wool Merinos. During periods of heavy rain, sheep would go off feed, and the reduction in nutrition caused a weakness in the fiber that led to localized breakage during processing. Lewis worked to find a genetic solution to the problem.

He loved the area – the wine industry, the brown trout, the friendly folks in the town of 5,000.

“But as a young animal breeder, I was somewhat isolated and found myself shifting toward wool biology,” he says.

Opportunity knocks
Before long, Scotland came calling. He was offered a position in Edinburgh – a world center of quantitative genetics research – at the Scottish Agricultural College. It was applied research, with an emphasis on industry integration. The next decade was filled with sire referencing schemes, genetic connectedness, carcass merit, X-ray computed tomography and ultrasound technologies, combined with looking at interactions of sheep with their grazing environment.

He studied what and how much sheep eat, and how they grow. He led a large-scale commercial trial to validate selection indexes. “We developed tools that actually matter in the real world.”

He also met his wife of nearly a dozen years, a woman Lewis describes as “his best friend and most generous in her loving care.”

He moved through the ranks in Scotland, headed for increasingly greater administrative roles, but ultimately decided he was not quite ready to “stop being hands-on.”

Then his old mentor, Notter, came calling and he returned to Virginia Tech, where his focus shifted from sheep to beef and poultry.

Virginia Tech honed his skills as an educator. He entered the classroom almost immediately, and developed an on-line quantitative genetics graduate level curriculum that is still widely used today.

“It was a chance to develop tools that are useful and important for producers and students,” says Lewis.

In time, the environment at Virginia Tech changed, with many of his cohorts in quantitative genetics retiring, and Lewis began to consider other options.

Then, once again, fate and opportunity came calling. The University of Nebraska–Lincoln tapped him for part of a new effort. They were expanding their quantitative genetics program in complement to their close collaboration with the U.S. Meat Animal Research Center, and Lewis decided it was time to make “one more move.”

“It was a chance to develop molecular tools tailored to the U.S. industry,” says Lewis. “A chance to build data into an industry infrastructure in partnership with experts at UNL and U.S. MARC in genetic sequencing and genome analysis.”

Moving forward
One and a half years later, Lewis is expanding his reach through the NSIP advisory position.

“The program provides so many opportunities to integrate molecular tools into the industry,” says Lewis. NSIP’s broad database (in conjunction with Australia’s LambPlan) provides a foundation for future efforts. “But we need more – more animals, more flocks, more connectivity between flocks. We have to improve our identification of the best animals to genotype.”

“We have to leverage what we’ve learned in other livestock industries and adopt cost-effective practices that make a difference,” he says. “Ultimately, there has to be an economic advantage.”

He will be working with the NSIP board and technical committee to innovate new ideas, and find ways to use information across breeds.

“Genomic tools only work well if planned, so we have to be wise in how we do things,” he says, adding with confidence the NSIP approach is exactly what the U.S. sheep industry needs going forward.

For Lewis, it’s one more opportunity to make sheep better.