It’s noon and Tom Cory is changing into his third pair of pants for the day. Such is the life of an Iowa farmer during the monsoon season.

As he waded through ungrazed, waist-deep grass earlier in the day, his only complaint was the fact that his truck was stuck in the mud of an adjoining pasture. His sheep and a few cattle plowed their way through that area a week earlier and the steady summer rains have turned what’s left into a sticky mess. 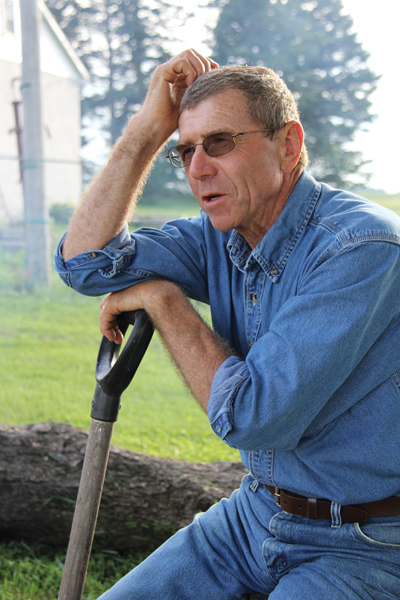 The ewes and their ever-present lambs have only one concern – reuniting amongst grass that climbs over their heads and conceals all but the largest of mothers as they move into a new pasture. The few cattle, who move daily from one pasture to the next with the sheep, do their best to trample the foliage.

Farmer’s markets, home delivery, internet orders. The Cory Family Farm offers it all from its modest home base in Elkhart, Iowa. Add in restaurant sales, grocery stores and rotational grazing, and it’s easy to see how Tom Cory (and his family) stay so busy.

Saturdays bring trips to the farmer’s markets in Des Moines and Ames. Sunday is a day of rest, or at least as much of one as a farming family can have. Tuesday and Wednesday are set aside for deliveries of the vast orders pouring in from those who can’t get to the farmer’s markets. Daily chores include feeding the sheep, cattle and chickens that will eventually make their way to area lockers for processing before ending up in the multitude of freezers that line one side of the family barn.

There’s a small area set aside for row crops, but just enough to feed the four children (Gavin, 17, Luke, 15, James, 10, and Lorinda, 6) who still call Tom and Mary’s place home. Their oldest son, Spencer, is off on his own in the military. Tom also has four adult children from a previous marriage.

The couple has diversified its interests with cattle and chickens, but lamb is still the top commodity for the family business. Originally, it was known as Cory Country Lamb, after all.

“In the fall/winter of 1994-95, Tom and I bought 100 polypay bred ewes from western Iowa,” Mary recalls. “He was still teaching at the time and we’d been farming some, too. He’d do chores at night and on the weekends, but the sheep were pretty much my responsibility.”

Mary’s background included raising a few sheep for an FFA project when she was a teenager, then traveling to Australia for six months during her college years.

“I lived on a sheep ranch and it was such a great thing for me to be able to see,” she says. “Everything on the family farm back home had been set up for cattle, so it was all too big for the sheep. When I went to Australia, it was so great to see how much two people could do with equipment that was designed for sheep.”

Her plan of raising Merino sheep in central Iowa didn’t last long, however, as the breed wasn’t suited for the local climate and her family lacked the necessary grazing land. A few years later, those 100 polypay ewes came along and she was back in the sheep industry. Almost immediately, the couple started selling lamb at the Des Moines farmer’s market.

“I’m not sure why we wanted to do it so much, but Tom does like the face-to-face aspect of selling our lamb there,” Mary says. “Like a lot of things in life, I’m not sure we realized what we were getting into at that point. We had this romantic idea, but farming in the conventional sense of buying more acres just didn’t work for us.”

Mary had little experience cooking lamb at that point, but each week the couple’s customers looked to her as the expert.

“This was back before you could just google search everything,” she says with a laugh. “I learned a lot about cooking lamb in a short time through trial and error.”

Almost 20 years later, Cory lamb has developed a following throughout central Iowa. What started with a small freezer in the back of a pickup truck has turned into a thriving business that keeps Tom on a delivery route two days a week. The family also ships items that can be ordered through their website at CoryFamilyFarm.com.

Recent years have seen the operation’s sheep and cattle make the grass-fed leap. Stock-piled forage and high-quality hay help eliminate the need for grain in the winter.

“A lot of that really started to come about when we started paying attention to the chemicals in the foods we were eating in the house,” Tom says. “As we looked to eliminate a lot of that stuff in our own diets, it just naturally worked its way into what we were doing with the livestock.”

Soil health and rotational grazing play a large role in the family’s ability to eliminate corn and other feeds from the diet of their sheep and cattle.

“Tom had been feeding corn his whole life, so that was a huge mental hurdle to get over,” Mary says. “But once we got over it, there was no looking back.”

Acreage that might serve as one pasture on some operations has been divided into 60 paddocks on the Cory farm. Daily rotation allows paddocks to rest for anywhere from 40 to 60 days before it sees livestock again.

“When I told my mom what we were going to do, she kept saying we’d lose them all,” Tom recalls. “But I took her up there in the winter and they were all doing just fine, and they looked wonderful. Mary noticed it even more than I did because she wasn’t up there every day.

“Last year, at four months of age, most of the lambs were at 105 pounds on nothing but mother’s milk and grass. I think that’s pretty darn acceptable compared to what we did with feeding corn. Off just grass, we had a set of quintuplets, two sets of quads, 15 sets of triplets and a vast majority with twins.”

With so many lambs, the family turned to direct marketing once again, using Craigslist to sell off the “orphans.”
Tom and Mary hope their children will benefit from the things they’ve learned in recent years, as well as their ability to adapt to new ways of thinking.

“We had to unlearn some things about how you’re supposed to raise livestock,” Mary admits. “But our children are growing up in a time where people are more open to some of these new ways of thinking and new ways of looking at things. They won’t have to waste time unlearning all those things we had to unlearn.”

Cory Family Farm customers fall into two distinct groups: those who want grass-fed lamb and those who simply want great-tasting lamb. Customers have even told the couple they didn’t care what the sheep were fed, as long as the taste of the lamb didn’t change.

“That was a concern,” Tom says. “What if we did all this work and suddenly the taste was different? What we found is that the taste didn’t really change. So, we’re offering a healthier product that still tastes great. That makes everyone happy.”

To learn more about the farm, visit CoryFamilyFarm.com.