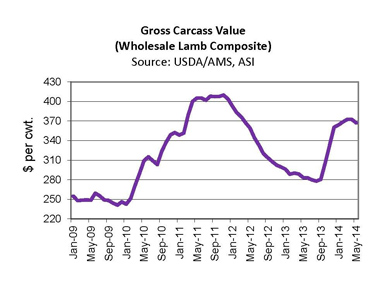 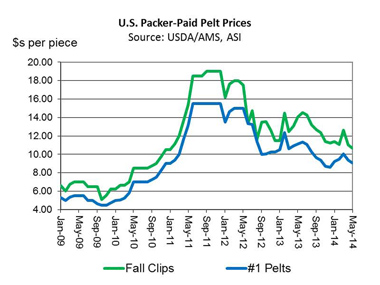 Lamb prices softened across sectors in February as slaughter slowed. The U.S. Department of Agriculture Agricultural Marketing Service (AMS) reported in late February that consumer demand is still struggling and packers are continuing to decrease bids. The Mandatory Price Reporting, formula carcass weight in late February averaged 83.7 lbs. – equivalent to 166.1 lbs. on a live weight basis compared to a more typical 140-lb. lamb. Coordinating seasonal production with year-round lamb consumption and heightened leg consumption during Easter is a challenge. When the industry gets out of synch, the casualties are higher lamb weights (uncertain quality) and price volatility.
In the West, where the majority of U.S. sheep are produced, most lambing occurs between February and May. These spring-born lambs are marketed late in the summer. While some lambs go straight to feedlots at this point, many feeders are sent to the Imperial Valley, California to slow down growth through the fall on alfalfa pastures. These “old crop” lambs are then sent to feedlots late in the year or early the next year in preparation for Easter.
Between the first of the year and Easter, weekly slaughter increases steadily, rising anywhere from 12,000 to 19,000 head per week in total to stock holiday supplies. This year, weekly slaughter trends have been aberrant, up one week, down another. A similar pattern existed in early 2012 when slaughter lambs hit 155 lbs. on a live weight basis (172 lbs. for formula-priced lambs). Steady increases in weekly slaughter in the months before Easter are critical to keeping lambs current. Otherwise market-ready lambs get backed up, and heavier.
In California, lambing occurs primarily from October through November. It is typically not until about February through April that the California “new crop” feeders (or springers) are sent to feedlots. AMS reported in February that California springers will not start moving until later in March or April as California still has a good feed supply from earlier rains, although it has started to heat up and much of the state is starting to get dry. New crop lambs typically supply the leaner post-Easter and summer months.

Sixty- to 90-lb. feeder lamb prices at auction in San Angelo gained 1 percent monthly in February to $207.83 per cwt., but were down one-half percent from a year ago. Auction prices in Sioux Falls averaged $230.36 per cwt., up 13 percent monthly yet down 2 percent year-on-year.
The only reported trade in the direct feeder lamb market in February was $172 per cwt. for 1,750 head out of Washington at an average 90 lbs.
Denver corn averaged $3.85 per bu. in February, up 2 percent monthly and 15 percent lower year-on-year. The recent strengthening in the corn market might be due to reportedly lower corn planting intentions by farmers.
In general, according to the Livestock Market Information Center (LMIC), building stocks have lowered corn prices this season. The average corn price received by farmers this marketing year is expected to be in the $3.60 to $3.70 per bushel range, the lowest since 2009/10 which averaged $3.55 (2/27/15).

Fall Clips average $5.75 per piece in February, steady compared to January and down 46 percent year-on-year. No. 1 pelts average $3.50 per piece, also steady monthly and down 61 percent. No. 2s received an average 25 cents per pelt, down 95 percent from a year ago. Imperial Fall Clips brought $6.25 per pelt, steady monthly, but down 51 percent year-on-year.
The U.S. is not alone. In 2014 Australian lambskin prices weakened by 85 percent and 40 percent in New Zealand (Wall Street Journal, 1/11/15).
A confluence of factors have led to plummeting pelt prices. Weaker demand from Russia and tougher environmental regulations in China – forcing many small Chinese tanneries to shut down (Wall Street Journal, 1/11/15).
The weaker Russian ruble has made imported lambskins more expensive for Russian customers. Russia also is keeping more of the skins it produces as a result of U.S. and European bans on importing Russian farm products in the wake of the Ukraine crisis. Mark Mai, chief executive at Mengzhou Senlong Fur Co. in eastern Henan province, said sales of his company’s lambskin products to shoe factories in Guangdong province in southern China fell between 50-60 percent last year as a result of slower demand from Russia (Wall Street Journal, 1/11/15).
Mr. Mai reported that there is good news in the pelt market, however, with new online markets gaining popularity. Demand for lambskin clothes on Chinese e-commerce sites such as Taobao surged last year, he said, though for his business, these factors haven’t been enough to offset the decline in sales to Guangzhou. Taobao is a Chinese website for online shopping similar to eBay and Amazon. A quick search found that many lambskin products – from shoulder bags, lambskin wedge heel sandals, to gloves, to men’s and women’s jackets – were readily available on Taobao.
In the U.S. pelt quality can be an issue during winter. Heavy snowfall and wet and muddy pens in Colorado feedlots can mean lambs carry mud into the slaughterhouse, reducing pelt quality. However, as AMS reported in February, most feeders were spreading corn stalks or straw to try and combat the issue with success.

This April report is always exciting because we finally get year-end import figures can finally calculate 2014 total supplies.
In 2014, lamb and mutton imports saw a 12-percent annual gain to 194.8 million lbs. Mutton imports gained 16 percent to 30.3 million lbs. and lamb imports gained 12 percent to 164.5 million lbs. Lamb imports from Australian saw a 20-percent increase in 2014 to 121.3 million lbs. and New Zealand’s lamb imports were down 6 percent to 41.8 million lbs.
Last year was the second consecutive year of total lamb and mutton supply increases. In 2013 total supplies gained 6.2 percent and gained another 6.4 percent in 2014. Over the past two years lamb and mutton imports increased 14.3 percent and 11.9 percent, respectively.
By comparison, domestic lamb and mutton production fell 0.3 percent in 2013 and gained 0.1 percent in 2014.
While domestic production has held relatively constant, imports have gained which has eroded the U.S. market share. In 2012 both the U.S. and imported product each held half the market. In 2013, the U.S. share fell to 47 percent and the import share rose to 53 percent. In 2014, the domestic share fell again, to 44 percent, and the import share rose to 56 percent.
Total lamb supplies are just that, available supplies. We don’t know how much lamb and mutton was actually consumed due to sizeable freezer stocks. At the beginning of February, 35.2 million lbs. of lamb and mutton were in cold storage, up 13 percent monthly and 37-percent higher year-on-year. Reportedly, a considerable portion of this volume is imported product.
Another qualification on total market shares is that we don’t know what portion of lamb and mutton is channeled to the retail versus food service sectors. It is very possible that U.S. production has the majority share of the hotel, restaurant and institution (HRI) trade while imported production has the majority market share at retail.

During Valentine’s Day week, the amount of sampled retail stores advertising lamb/veal items doubled to nearly 14 percent. According to AMS, lamb features were up by 1,480 outlets nationally. Lamb loin chops were the leading feature item at lower prices: $7.31 per lb., 17-percent lower than a year ago. Lamb racks and breast also found their way back into ads over Valentine week as a holiday special.
The dynamics of commercial retail lamb marketing has its opportunities and challenges. For many of the big grocery chains, lamb accounts for less than 1 percent of the meat case according to Dr. Dennis Stiffler — Mountain States Rosen chief executive officer (1/2015).
Dr. Stiffler added that retail prices are at the end of the chain and therefore lag behind all other segments of the chain. Therefore, retail prices may reflect live and carcass markets from several months prior (1/2015). The small volume and thus relatively higher marketing risk can mean higher margins to retailers. According to Dr. Stiffler retailers markup product 15 to 40 percent to cover operations, overhead, considerable shrink (throw away product) and profit expectations.
Dr. Stiffler explained that retailers tend to use less variable pricing: Lamb is profitable at times and a loss leader at other times. A loss leader is a pricing strategy where lamb is sold at below-market price to stimulate sales of full-priced lamb at a later date. A question for further research is whether the rigidity of commercial retail marketing fosters the periodic back-up and weight gain of commercial lambs in Colorado feedlots.
An obvious benefit of selling lamb through the largest grocery chains is the sheer volume that is marketed and the value-added to the industry of positioning lamb in a convenient venue to most U.S. consumers.

Big-box and national grocery chains is only one of many markets for lamb. Barkaat Foods – located in Chiappetti Veal and Lamb’s old Chicago slaughterhouse – sells halal and kosher lamb, goat and veal direct to customers, wholesale and to further processors.
Processing about 2,500 lambs per week, it is a relatively small processor, but with a rapidly growing customer base.
At the 2015 ASI/NFLA convention Dennis Stiffler explained that due to scale and consumer demographics lamb is a specialty market…not a commodity.
Furthermore, there are niche markets within our specialty market. One such niche is the halal and kosher lamb markets, and the organic market.
Barkaat Foods has found that its market has expanded beyond the Muslim community because many consumers find that the production and processing of halal lamb meets their definition of organic (Meatingplace.com, 3/2015).
Among other outlets, Mohammad Imran Khan – CEO and founder — sells online through a direct-to-consumer portal Taaza2u.com.
With currently over 6,000 customers he hopes to grow to 15,000 (Meatingplace.com, 3/2015).
Barkaat also provides custom harvesting services. Dallas-based Rosenblatt Meats slaughters 1,000 head of kosher lambs per week at the Barkaat facility and then sends the carcasses north to Wisconsin-based Strauss Brands for further processing and packaging.
Barkaat aims to fulfill the holiday needs of its Muslim community. In 2014, 3,000 people signed up for its third-annual Eid ul-Adha event in October (Festival of Sacrifice) in which families slaughter their own livestock.
The U.S. lamb market should be changing as rapidly as its diverse customer base.
The U.S. Census Bureau explained that by around 2020 more than half of the nation’s kids 18 and younger will be part of a minority race or ethnic group (3/4/15). How and where will this minority young generation want to buy their lamb?