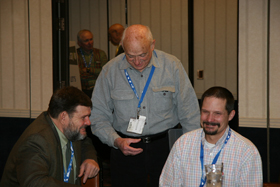 Texas and California have long been the nation’s leaders in sheep production. And while South Dakota’s 2015 inventory keeps it in the top 10 states, South Dakota’s 255,000 head is well below Texas’s 720,000 and California’s 600,000.
What may be surprising, however, is that South Dakota has become a leader in the sheep industry in providing production education and spearheading growth in the sheep industry. The Sheep South Dakota Project (SheepSD) was recently recognized during the 2015 American Sheep Industry (ASI) annual convention in Reno, Nev.
“The sheep industry in South Dakota is an integral part of agriculture production systems throughout the state,” said David Ollila, sheep specialist with South Dakota State University (SDSU) Extension in Rapid City and sheep rancher near Newell, who heads up SheepSD. “It is with great enthusiasm that SDSU Extension has placed a high priority on supporting the industry through efforts to help producers develop production program that will not only provide sustainability, but also promote an increasing number of sheep producers in the Northern Plains.”
South Dakota currently sits in seventh place in sheep production, with Colorado, Wyoming, Utah and Idaho also ahead of it. That’s not unexpected, considering that 80 percent of the nation’s sheep are owned by large operations in these states, according to the 2012 Agricultural Census. Small producers, those owning fewer than 100 sheep, comprise the majority of sheep operations, although they own only 17 percent of the U.S. inventory. SheepSD, an educational pilot program designed by SDSU for new producers entering the sheep industry, was born out of ASI’s “Let’s Grow with twoPLUS” campaign launched in 2011 to grow the U.S. sheep inventory and stay competitive on the global market scene. Initially referred to as “2+2,” Let’s Grow urged producers to strive to increase the size of each individual operation by two ewes per 100 head by year 2014. Two more goals have evolved out of the Let’s Grow campaign since: To increase the average birth rate per ewe to two lambs per year and to increase the harvested lamb crop by 2 percent.
As part of the campaign, ASI has been distributing annual grant funding to state affiliates like the South Dakota Sheep Growers and the Nebraska Sheep and Goat Producers to develop educational activities and mentoring programs for new and expanding producers. Many states have seen success in attracting producers new to the sheep industry and coaching them through the learning curve of the early years.
“People are hungry for information on how to raise sheep, how to be more profitable, how to raise more lambs,” said Roger High, sheep associate with Ohio State University Extension at Columbus, Ohio, who is working on a multi-state project to develop a sheep business planning workbook.
SheepSD has also been receiving funding from ASI, to the tune of $20,000 per year for the last three years.
Among SheepSD’s offerings are a mentorship program; webinars, shearing and sheep management schools, tours and evaluations of existing operations, post-weaning lamb performance evaluations and other activities to develop production and management skills; and creation of ranch advisory teams and ongoing learning communities among producers. To date, one learning community called Growing South Dakota Sheep Producers consists of 42 members.
SheepSD activities for 2015 will continue activities from previous years as well as add grazing schools.
“We’re getting more young people involved and promoting leadership skills for engagement in the local and possibly national level,” Ollila said.
During the national convention, ASI leaders discussed the hope to replicate SheepSD in other regions of the United States.
This year, ASI is making $500,000 available in grant funds. Applications are due to ASI by May 1. Visit www.sheepusa.org for more information, or contact Alan Culham at alan@sheepusa.org or 517-896-7378.
“This is an opportunity to strike while the iron’s hot,” said Culham, ASI coordinator of Let’s Grow Campaign.