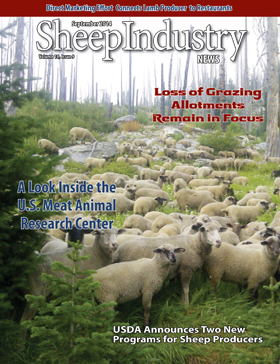 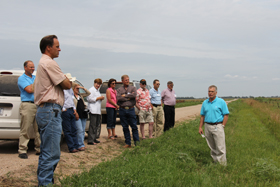 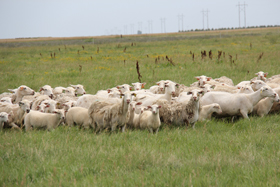 “To solve the complex problems of today, there is a need for a critical mass of people with different backgrounds.”
Emil J. Pollak, Ph.D., director at the U.S. Meat Animal Research Center in Clay Center, Neb.
Members of ASI’s executive board were given the opportunity during their mid-year meeting to share in the 50-year celebration at the U.S. Meat Animal Research Center (USMARC). The board was updated on the research being conducted at the center as well given a tour of the complex.
Research being conducted at USMARC parallels the direction of the Let’s Grow Campaign, which is to strengthen the sustainability of the industry by increasing profitability along with the supply of quality lambs.
Current research activities focus on the evaluation of maternal lines and mating systems in a low-input, pasture-lambing production system. The experiment includes Polypay, Katahdin and Easycare sheep. The Easycare flock is a maternal line of prolific hair sheep created at USMARC to raise triplets on pasture without increasing labor or adding supplemental feed, thus increasing outputs in a low-input type of system.
“There has been increased interest in easycare sheep and low-input, pasture-lambing production systems because the high labor costs associated with traditional breeds and production systems impose major constraints on both profitability and opportunities to increase flock size,” stated Kreg Leymaster, Ph.D., research scientist at USMARC. “Reducing labor costs per ewe is one of the best opportunities to increase profitability and attract new investments to the industry and one approach to reducing inputs while maintaining or increasing outputs is to use ‘easycare’ genetics in a low-input, pasture-lambing production system.”
Based on past experimental results, USMARC created the Easycare maternal line of sheep, which has a genetic composition of one-half Romanov, one-quarter White Dorper and one-quarter Katahdin.
“In 2012, USMARC reported the discovery of TMEM154 as a major gene affecting Ovine Progressive Pneumonia (OPP),” touted Mike Heaton, Ph.D. “This knowledge provided the industry with a new way of thinking on how to eradicate the disease.”
With 36 percent of the U.S. flock infected with OPP, the cost of the disease is significant. Infected ewes are less likely to lamb, wean 8 percent fewer lambs and weaned litters are 24 percent lighter. A new statistic also states that industry spends $11 per infected ewe in milk replacer to rear the lambs.
The goal at USMARC is to provide methods to reduce and then eliminate OPP in the United States. Breeds differ in their level of susceptibility to OPP, suggesting genetic differences in susceptibility to the virus. Purebred Finnsheep and Suffolk sheep, raised together, resulted in the Suffolk consistently having a lower incidence of OPP than the Finnsheep. The infection rate is increased up to 8 times in a highly susceptible animal.
It has been learned that transmission of the OPP virus is primarily respiratory (75 percent) with roughly 25 percent of the transmission coming from infected colostrum. This is important information to have since the infection is life-long and there are no treatments or vaccines.
The impact of the adoption of programs utilizing the knowledge of OPP transmission and the TMEM154 gene was demonstrated by Dave Thomas, Ph.D., University of Wisconsin, when he successfully reduced the incidence of OPP in the university flock from 41 percent to 2 percent in just three years.
“What can producers do with these results?” asked Heaton. “The first step in the process is to determine if the flock is infected by serologically testing older ewes.”
Focusing on the future of the center, Pollak explained that the direction will be determined by answering the question, “What can we be best in the world at?”
“We here at USMARC addressed shrinking budgets by being more efficient in our agriculture enterprise,” said Pollak. “We eliminated activities that did not support a specific research objective. We maintained two to three flagship sheep programs and are targeting an on-site population of 2,800 ewes exposed.”
USMARC is best at genomics, large animal projects and management strategies, biology of production traits and pathogens and host pathogen interaction.
“As dollars come in to the center,” explained Pollak, “those are the areas that the center will concentrate its efforts. Those are our sweet spots.”
National research projects are prioritized with industry input. Pollak recommended that industry leaders look at how the research needs of the sheep industry fit in to the areas that USMARC does well and recommend research that can be augmented by these sweet spots.