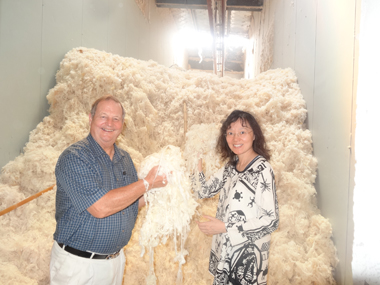 NANJING, China – A team representing ASI and the U.S. sheep industry participated in the 26th International Wool Trade Fair and Information Conference, held Sept. 12-14 in China’s ancient city of Nanjing.
Nearly 500 representatives from 26 countries attended the three-day conference that focused on the international wool market and business conditions.
ASI consultants Kitty Gu and Barry Savage were joined by Terry Martin of Anodyne, Inc. and Jason Banowsky of Lempriere USA in promoting U.S. wool through the ASI wool export program and USDA’s Foreign Agriculture Service.
“Nanjing Wool Market is an annual event for wool people from around the world to gather and discuss current issues, including future developments as well as new market opportunities,” said Rita Kourlis Samuelson, ASI’s wool marketing director.
The ASI team participated with growers, traders, primary processors, spinners, weavers, manufacturers and a number of related organizations in the international wool pipeline. Chris Wilcox of Poimena Analysis gave a presentation on the situation and outlook for the global wool market. In his presentation, which asked whether there is light at the end of the tunnel for the global and Chinese wool textile industry, Wilcox reviewed the 2013-14 season. He noted that demand had not recovered as much as expected in 2013-14. “In part this was due to slower-than expected economic growth in the major advanced economies as well as a slow-down in economic growth in China as the Chinese economy enters a transition phase,” Wilcox noted, adding that retail sales of clothing in many countries has not improved, in spite of consumer confidence rebounding to the highest level in seven years or more in the U.S. and in Europe. For the year to 2014 to July, the reverse has been true, with significant increases in China’s exports of many wool products while China’s imports of raw wool has fallen by over 10 percent.
Wilcox reported that wool production remains at the around 70-year lows, although production of superfine wool (18.5 micron and finer) has increased while medium merino wool production (20 to 24 micron) has fallen. Wilcox is optimistic for a moderate improvement in raw wool demand towards the end of 2014 and into 2015 on the back of better retail sales for clothing and, therefore, better demand for wool textile mill.