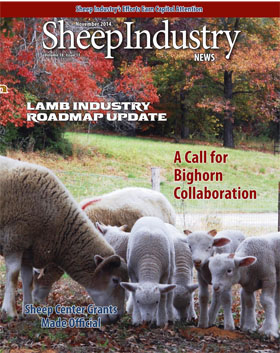 The Meat Industry International Stewardship Advisory Council (MIISAC) has been formed to help the meat industry ensure that the introduction of new production and processing technologies does not interrupt trade. “Our goal as an industry is to adopt new technologies in a manner that is consistent with continuing to grow exports,” said Forrest Roberts, chief executive officer of the National Cattlemen’s Beef Association (NCBA) and new MIISAC chairman. Dennis Stiffler, Ph.D., of Mountain States Rosen, LLC  is the council member representing the American Lamb Board.

The deadline for the submission of nominations for the annual American Sheep Industry Association awards is Nov. 15. There are three award categories available for nomination:
• THE MCCLURE SILVER RAM AWARD is dedicated to volunteer commitment and service and is presented to a sheep producer who has made substantial contributions to the sheep industry and its organizations in his/her state, region or nation.
• THE CAMPTENDER AWARD recognizes industry contributions from a professional in a position or field related to sheep production.
• THE DISTINGUISHED PRODUCER AWARD was launched in 2014 to recognize the 150th Anniversary of the national organization – the oldest livestock association in the country.
To receive a nomination application, call or email ASI: (303) 771-3500; info@sheepusa.org. The form can also be downloaded from ASI’s website, www.sheepusa.org.

Nike has unveiled a line of footwear that is an Oregon-centric collaboration with Pendleton Woolen Mills.  Channeling the state in which they were founded, two of the region’s most iconic brands have united for a limited run of NIKEiD customization choices. Pendleton is as renown for wool shirts and blankets as Nike is for sport apparel and footwear. Pendleton by NIKEiD shoes bring legendary craft and personal details to modern looks. Eight iconic silhouettes are available in three tartan patterns, one plaid and four solid-color wool fabrics, 10 leathers and an array of accent colors. A selection of the shoes are now available at www.nike.com.