DIXON, Calif. — A strategic plan will allow the country’s largest lamb processor to avoid downtime while it moves into a new state-of-the-art facility next spring.

That was among the good news shared by Superior Farms during a ceremony held April 25 to break ground on the company’s 50,000-square foot site, which will sit adjacent to its long-standing building just outside of Dixon.

Construction is expected to take one year, Shane MacKenzie, vice-president of operations for Superior, said.

“We are ‘right-sizing’ this facility,” MacKenzie, who traveled the world in recent years to study modern processing facilities, said. “We’re building the plant to be more efficient and appropriate for the number of livestock coming through [these days]. And we’ve used some of the best experts in the field to design something that makes sense – our own employee owners who work the line every day and know it better than anyone.”

According to MacKenzie, the new lamb processing plant has been designed utilizing “green” technologies. It will leverage the best in ergonomics, natural lighting, wind power and water reduction – while reducing the company’s total energy consumption by about 45 percent. 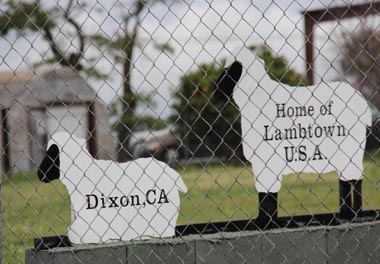 “The savings on our power bill will be substantial right off the bat,” MacKenzie said. “The new plant was basically designed by our operations team, using information we gathered by looking at some of the newer plants that have been built around the globe. We took facets that work best for us.”

Attending the groundbreaking were a number of local and state officials, along with California lamb producers and, on the national level, USDA’s Mike Lynch.

Superior CEO Rick Stott stressed that the investment in the new facility confirms the company’s belief in the lamb industry.

“We want to give producers the confidence that they will have a market for their lambs for a long time to come,” Stott said “As stewards of all things lamb, we are investing not only in this plant, but also in the producers. Together we will thrive.”

“It means a lot – not only to producers but to the entire industry,” Hamilton said.

Superior Farms, founded in 1964, employs more than 400 people. It is North America’s largest processor and marketer of lamb and provides products and services to customers throughout the U.S., Canada, and more than 10 other countries.

The current Dixon processing facility was originally built in 1923 and has served as both a beef and lamb packing plant ever since. It will remain operational until the new construction is complete, preventing operational stoppages, MacKenzie said.