Cattle and greater sage grouse seem to be getting along just fine in southeastern Montana, according to a recent Fish Wildlife and Parks study – and that’s a big deal.

As sage grouse have been listed as a species worthy of protection under the Endangered Species Act, but precluded by higher priorities for now, western farmers and ranchers have been concerned about what the implications of such a decision might mean to the way they use the land.

“They’re real worried that if that bird gets listed, the federal government will come in and tell them how to manage that ground,” said Melissa Foster, an FWP biologist who was the lead author of a four-year study in Montana’s Powder and Carter counties.

Environmentalists have long called for the elimination of cattle grazing on public lands where sage grouse live to preserve habitat for the birds, calling grazing destructive to the hiding cover needed to avoid predators and to forbs the birds eat. 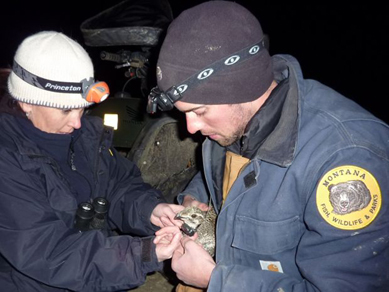 Windy Davis, at left, and Chris Binschus attach a radio transmitter to a hen sage grouse as part of a four-year study of grouse on Montana grazing lands

Understanding the Why
Why the two species are co-existing so well in southeastern Montana, however, is harder to pin down. Two very wet years fell within the four-year study period. Consequently, there was a lot of vegetation on the landscape.

Typically, nesting success tends to be related to vegetation height, which would normally be lessened by grazing. But this study found that “nest success was higher for nests in pastures with livestock concurrently present (59 percent) than pastures without livestock (38 percent).”

In addition, the study found that brood success in the first two weeks after hatching was better for those chicks that hatched in pastures with livestock (79 percent) than without (61 percent).

Unfortunately for sage grouse, the study indicated that coyotes and foxes weren’t the biggest predators. They were responsible for only about a third of sage grouse kills. The high predation rate on sage grouse by raptors (40 percent), however, was a surprise to Dale Tribby, supervisory wildlife biologist for the Bureau of Land Management in Miles City, who contributed to the study.

The study’s authors did not recommend predator control, however, noting that predation is a fact of life for all ground nesting birds, and that controlling avian predators is not possible due to federal law. Besides, “control of one type of predator often leads to unintended increases in other predator species.”

Guide to success
Scientists and conservationists are trying to piece together the best way to preserve sage grouse on their traditional sagebrush steppe environment, which is seeing greater pressures from oil and gas development, loss of habitat to wildland fires and even conifer encroachment.

Foster said her research should provide a guideline for developers as projects are proposed in the southeastern Montana sage grouse core area.

But one of the problems with sage grouse is that they can travel so far. The longest documented sage grouse migration to a wintering area, in a northern Montana study, was about 75 miles.

“A lot of time, these birds are using a large landscape,” Foster said, which can make it hard for biologists to pinpoint what the problem is when there’s a population decline.

Viral Threat
The study area in Powder and Carter counties has lek counts going back 30 years. A lek is where the birds gather during breeding season. Males dance and fight as the hens gather around to select a worthy mate. Such congregations offer the best time for biologists to count the bird population.

Over the past 30 years, the sage grouse population has remained fairly stable except for a spike in 2005 followed by a West Nile virus outbreak in 2007 that dealt a deadly blow to the birds.

In a population viability analysis, Foster said the study found that sage grouse were extremely likely to persist into the future but West Nile virus is the wild card. West Nile virus is spread by mosquitoes that breed in wet areas.

“It stinks because there is very little we can do about it,” she said. “It’s mosquito country out there. There’s no feasible way to get rid of the mosquito habitat.”

And, unfortunately for sage grouse, the virus almost always proves deadly, she added. Blood tests of hens captured in the study showed none had survived a West Nile virus infection. Another study has shown, however, that West Nile virus coupled with another stressor like oil and gas development, can nearly double the sage grouse mortality.

Takeaways
The study area included a land mix of about 54 percent private, 36 percent BLM and 10 percent state, spreading east from the Powder River to the South Dakota border and south from the Powderville Road to the Wyoming border. Tribby said the study, and other information the BLM has on the area, would be consulted if there are proposals for development. In the study area, bentonite surface mining and natural gas extraction are occurring and several buried oil and gas transmission pipelines traverse the landscape.

Suggestions from the study that the BLM might consider included that restrictions on activities in sage grouse nesting areas be maintained until July 15 to ensure greater chick survival, and a minimum 4 mile buffer around leks for “highly intrusive practices.”

Tribby also said the study helped identify areas outside of traditional wintering grounds that the BLM did not know about — areas without the largest and most robust sagebrush.