WASHINGTON — From immigration to predator control to research funding, sheep producers returned from the annual spring trip feeling as though their voices were heard concerning key issues facing the industry.
ASI President Clint Krebs set the tone by testifying before the House subcommittee on Livestock, Risk Management and Credit on April 29. A week later, producers and industry representatives arrived in the nation’s capital to meet with USDA and legislators from their respective states.
“Our time in D.C. this year was quite productive and everything I have heard has been positive regarding responses to our programs,” Krebs said. 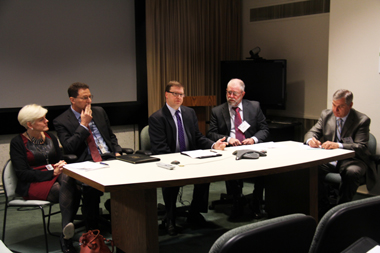 For producers like Fred Roberts of Wyoming, a meeting with immigration officials provided reasons for optimism.
“To be honest I wasn’t expecting much, but we were able to get our points across and they seemed to hear what we were saying,” said Roberts, who has had problems with herders leaving his ranch without fulfilling their contracts. Roberts is among a number of producers calling for a system to better track H-2A workers.
Roberts and a contingent led by ASI Executive Director Peter Orwick met with U.S. Homeland Security’s legal division that handles criminal investigations.
In his testimony, Krebs noted that the sheep industry has benefited from the H-2A program, which allows U.S. employers who meet specific regulatory requirements to bring foreign nationals to the U.S. to fill temporary agricultural jobs.
“The sheep industry likely has the most documented and truly legal workforce of any in agriculture, achieved annually at great expense and with much paperwork,” Krebs said. “We ask that any legislation on immigration reform codify the procedures we have long used.”
During meetings with Agriculture Marketing Service (AMS) officials, the value of mandatory price reporting was discussed. The program expires in 2015 and must be reauthorized by Congress to continue. Craig Morris, deputy administrator of AMS’s Livestock, Poultry and Seed Program, told those attending the USDA meeting that ARS has been able to make some lamb-market report changes as requested by the industry in anticipation of the reauthorization.
More changes to the reporting system for lamb “will likely be incorporated in a federal register package this summer,” Morris said. 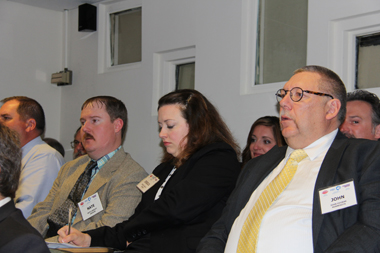 Morris also reported that the instrument grading project is moving forward. He added that it has been a very useful technology for other industries and that AMS hopes to finalize a voluntary standard for instrument evaluation of lamb carcasses very soon.
Farm Service Agency (FSA) officials updated participants on the Livestock Indemnity Applications (LIP), saying that 20,000 to 30,000 were received in the first weeks of the program.
“With the program being a continuation from the 2008 Farm Bill, Secretary of Agriculture directed the FSA offices to roll the program out in a mere 60 days,” Brad Karmen, deputy administrator for farm programs, said. “It is expected that billions of dollars will be paid out through the Farm Bill disaster programs.”
Karmen also announced that there is now an open-range policy where producers that are unable to verify losses have options to use five-year lambing average records or ewe inventory to establish beginning lamb crop compared to numbers at docking to establish loss. A standard lambing rate and a discount for non-variable losses were added to the program that ASI is evaluating to determine if the program will now work competitively for range lambing operations.
The impact of adverse weather on a lambing operation was also discussed and producers were assured that FSA now has a policy for state and local offices to follow to determine losses. Early reporting of an adverse weather situation is important to managing the situation correctly.
In conclusion, Karmen reminded growers that the disaster programs are now permanent and will only be discontinued if Congress stops the programs. Under the 2008 legislation, the program funding expired in late 2011, leaving a two year void in disaster coverage.
“Sheep research was dealt with kindly in appropriations this year,” said Steven Kappes, Ph.D., deputy administrator Animal Production and Protection with Agricultural Research Service, “from additional funding to an assurance that no research facilities are targeted for closure in 2015.”
Sheep studies are continuing across the country ranging from parasite resistance and genomics to blue tongue, easy-care sheep and grazing lands. Diagnostic testing and genome sequencing also continues on bighorn sheep.
Kappes suggested that the industry is dealing with perception when it comes to the conflict between domestic sheep and bighorn sheep. The headlines focus on the negative effects of the bighorn sheep yet little to no exposure is given to the destructive results experienced by the sheep producers who will likely lose their ability to raise sheep as well as lose a way of life.
An inter-government panel of trade officials from USDA’s Foreign Agricultural Service (FAS) and the U.S. Trade Representative’s (USTR) office provided the final comments to attendees. Ron Baumgarten, a director in the office of agricultural affairs, acknowledged that even though bovine spongiform encephalopathy (BSE) does not affect lamb, lamb markets were closed along with the beef markets after the 2003 BSE case in the United States.
Now that the BSE status in the United States has been upgraded to one of negligible risk, exports should be easier. The USTR office has reached out and started the process to again trade lamb with Indonesia, Japan, Korea, Vietnam and Taiwan. Currently, China is not willing to accept the negligible risk status of the United States.
Work is being done at a relatively high level to remove of trade restrictions, complete questionnaires and discover the trade requirements of a country. USDA’s Catherine Fulton, acting director, FAS, explained the documentation the department has been submitting to foreign markets, particularly on scrapie, since it is often used cited as a trade barrier. 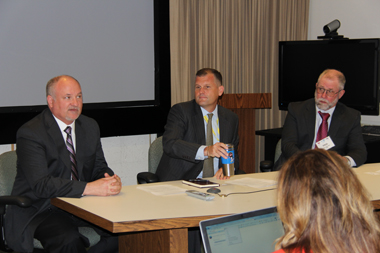 The industry was pleased to hear from the trade representatives that their “general approach on textiles is to follow the yarn-forward rule.” Using a single-step approach opens the U.S. textile market up to product from China moving to another country for cutting and sewing and then importation into the United States, which would have a devastating impact on an already diminished industry.
ASI’s president Clint Krebs summed up the department meetings by saying, “We are pleased with the aggressive efforts of long-time partners on issues like scrapie control and market reporting, as well as research and risk management. The joint panel on trade confirmed that our trade officials recognize the need to prioritize American lamb-market access.”
Menu