Ways in which sheep ranching and marathon running are similar cannot be counted on Ken Wixom’s oft-blistered toes. Each pursuit offers its fair share of both joy and disgust, exhilaration and exhaustion, exposure and solitude. Anyone who runs 26.2 miles will admit – just as anyone who raises sheep for a living will concede – a pain here and there is considered part of the deal.

“The biggest difference between the two,” Wixom, an Idaho rancher and one of the newest members of ASI’s Executive Board said, “is that you can wake up in the morning and decide not to run. That thinking won’t cut it as a rancher.”

Quiet yet outspoken on important issues facing sheep ranchers and the sheep industry, Wixom was elected to the Executive Board during the annual ASI Convention in January. A former president of the Idaho Wool Growers Association, Wixom represents ASI’s Region VII, which includes Montana and Wyoming, as well as his home state of Idaho.

“This is certainly a beautiful place to live and work,” Wixom, who also served as president of the Eastern Idaho Grazing Association, a group of about 40 family cattle and sheep ranchers who collectively manage 90,000 acres of land in the area, said. “We’re wide open out here, it’s big country.”

Big, too, are issues facing Wixom and his fellow ranchers. The ongoing battle over the Payette National Forest and bighorn sheep has created concern about future growth of the sheep industry. The U.S. Forest Service decision to reduce domestic sheep grazing by 70 percent on Payette lands did not sit well with Idaho ranchers.

“This decision is obviously devastating to sheep production in Idaho and to the producers that are going to be affected by this result,” Wixom said when the initial decision was handed down in 2010. The more recent decision by a federal judge to uphold that decision leaves Wixom feeling the same way.

Other ranching concerns – predators, sage grouse protection, immigration and labor problems and, of course, market prices – are challenges that greet Wixom as he joins the ASI Executive Board.

Actually, the “rough road ahead” is one of the major reasons he looks forward to working with the rest of the executive board to help the sheep industry grow and thrive.

“Above all else, I’m interested in helping,” he said. “There are some areas I am particularly interested in, such as natural resources and labor issues. But there are a lot of things we need to work on, and I’m looking forward to helping out and doing my part.”

Out of College, In to the Business
Wixom, 68, got his start in the sheep business just as he was graduating with a degree in Animal Science from Brigham Young University in 1971.

“Back at the start we had a really small farm, but we rented some land and just kept working hard,” Wixom explained. “You know, you are what you are. If it’s in your blood to be a rancher and a farmer, that’s what you are.”

Wixom mostly handles the sheep and cattle, while Dustin, 40, manages the crop and hay side of the operation, growing wheat and corn for silage.

“Dustin is the machinery guy, he likes the equipment and working the land,” Wixom said. “I’m the animal side, the rancher. We make a pretty good team that way.” 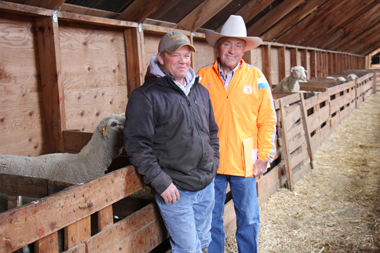 Ken Wixom (wearing his orange Boston Marathon jacket) and his son Dustin in the lamb barn.

Rancher as a Runner
Unlike most “people of a certain age” who run marathons, Wixom was not a lifelong runner. In fact, he started the sport only a little over a year ago as a way to manage his weight and maintain his health.

“It started with just small local races, 10ks and that sort of thing,” he said. “I have a daughter who is an engineer in Seattle and she kind of got me into that sort of running.”

Last summer Wixom competed in a halfmarathon in Salt Lake City, and his success in that race led him to register for the Seattle Marathon in December. He finished the 26.2- mile course in four hours, 29 minutes and 22 seconds. That was good for 5th place in his age category.

It also qualified him for the 2014 Boston Marathon – though he did not know it at the time. Actually, qualifying for the prestigious race did not even register on Wixom’s running radar.

“I really had no idea that I was on pace to qualify for Boston, which is the ultimate for a marathon runner. That’s how little I really knew about what I was doing. I was just running and thinking about getting to the end.”

At one point during the long course, a man started running up alongside Wixom and started a conversation.

“As it turned out, he was the same age as me,” Wixom said. “He told me he was trying to qualify for Boston. I lost track of him after while.”

Shortly after Wixom crossed the finish line, the man crossed behind him.

“He said ‘we did it’ and I replied ‘we did what?’” Wixom recalled. “He said we’d qualified for Boston.”

Up for the challenge, Wixom decided to register. In April, Wixom and his wife, Kathryn, traveled to Boston He didn’t know what to expect from one of the toughest marathon courses in the world.

“I told my wife to look for me at the finish line at about five hours,” Wixom said. He got there about an hour early.

Wixom finished the 2014 Boston Marathon in four hours, six minutes and 25 seconds. That was good for 124th place in his age division. 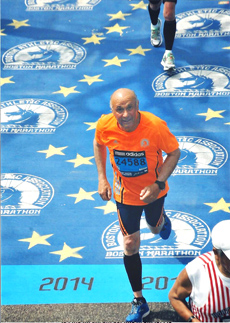 Overall, he finished in 19,385th place. “It [running] isn’t something I ever really planned on getting involved with, although I do have a brother who is a big runner,” Wixom said. “But, you know, it keeps me occupied and keeps me in ranching shape.”

He has developed running routes on and around his property and, in winter, often runs indoors.

On a windy morning in May, the parttime runner and full-time rancher was wearing his rancher hat, branding cattle – a feat that can require the endurance of a marathon runner. Later in the day, he’d be checking on his new lambs and making plans for the summer grazing season. Then there were the hours spent preparing for an upcoming ASI Executive Board teleconference.

On days like these, Wixom figures, a 26.2- mile run doesn’t seem all that rough.
Ken Wixom crossing the finish
line at the 2014 Boston Marathon