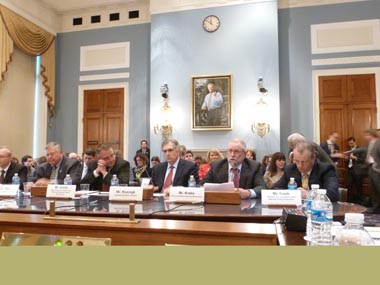 I just returned home from Washington, D.C., where I had the privilege of representing the sheep industry by testifying in front of the House subcommittee on Livestock, Risk Management and Credit.

It was a very rewarding experience to sit as an equal with all of the major livestock groups in the halls of Congress.
As I mentioned in my President’s notes a year ago, we do have people in D.C. who care. The elected politicians have to deal with politics, but I can guarantee all of their staff – along with all of the staff people who work for these committees – are working hard.
The system in D.C. is designed so people can express their views or opinions, and then staff members do their jobs by trying to build consensus, which is never an easy task – even on simple issues.
Being able to participate personally in the process reassured me the system really isn’t broke. In fact, it probably is the best system in the world, and I want to encourage people to get involved.
I would personally like to thank everyone who took time away from their own farms and ranches and spent their own dollars to make our presence worthwhile.
Taking History Notes
I have heard from some of you about the recent President’s Notes dealing with the history of our industry. If you have stories of your own about the history of our industry, please take the time to send them in, and we will try to compile them and distribute for our 150th convention.
I believe our history lesson from the May issue of Sheep Industry News stopped right before the revolutionary war. In my history classes, we were taught the war was about having to pay taxes to the home country. This was certainly an issue, but sheep were also a very important part of the reason the colonies decided to form their own country. The mother countries had forbidden the development of a textile industry. Sometimes we think we have it bad today, but can you imagine the prices received by the wool growers’ back then after paying freight across the Atlantic and being forced to sell to one buyer. I have heard one story about the Boston Tea Party – quite awhile after they razed the ship, wool bags were found in the bottom of Boston harbor and the wool was still usable.
So after the war, when we became our own country and began making our own textiles, there was a real effort made to improve the genetics and to disperse sheep throughout the states and territories. One of the most successful programs was undertaken by Edwin Hammond of Vermont, who was active from 1844 to 1877 and working with the American Merino.
He kept crossing three different lines to produce a more stocky type with wrinkles. They were using the proportion of the body weight contributed by the fleece as a goal. In 1812, the fleece contributed 6 percent. In 1865, it was 21 percent.
And by 1880 it was as high as 26 percent. These merinos not only became the prominent breed in Texas and the range states of the West, they were also exported to Australia and became the genetic base for their industry there. Next time you see an Aussie sheep man, be sure to let him know his genetic base started here, in the state of Vermont.
Pack ‘Em Tight
Right now there seems to be a lot of conversation and legislation about the amount of space our livestock needs for egg laying, or for farrowing sows. I wonder if we can generate public support for the amount of space being provided to people on airplanes, or in subways.
I can honestly say if I loaded a sheep truck as tight as they load subway cars in D.C. there would be dead sheep on all decks.
Menu