There are likely ample supplies of market-ready lambs in feedlots with a reported minimum of three times the volume of lambs in Colorado feedlots this spring compared to last. The drought in California prompted the flow of new crop lambs earlier than usual. While these lambs are not yet ready for market, the concern is the uncertain volume of old crop lambs yet to be “cleaned up.”
The market has done a good job of moving lambs with weekly slaughter rates over 50,000 head for Easter and an estimated 6 percent higher slaughter in the four weeks preceding Easter compared to a year ago. However, the higher percentage of packer-owned lambs in the mix is likely contributing to the slowdown in old crop marketings and hence weight gains. Market weights averaged 160 pounds for formula sales in April, with many lambs hitting over 190 pounds. Further exacerbating the situation is that lamb demand likely remains sluggish and freezer inventories hit yet another record high. Hopefully old crop lambs can be sent to market by the end of May which could support prices this summer in a typically lean-supply period.
Commercial Feeder Lamb Prices Down
The weakening slaughter lamb market likely incited feeders to lower offers on feeder lambs with prices falling about 7 percent monthly.
In general, lower cost of gain by lambs in feedlots supports feeder lamb prices, but the recent lower slaughter lamb market and increased corn usage by the livestock industry adds risk. Reportedly, drier conditions in Colorado feedlots dropped the cost of gain from around $1.50 per pound for some in February and March down to a low of about $1.10 per pound by April. The cost of gain could move lower or higher in coming months depending upon corn price projections. 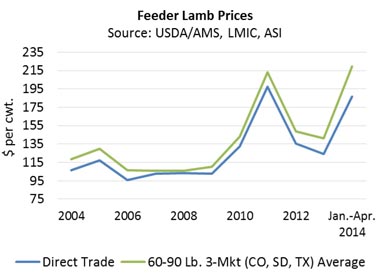 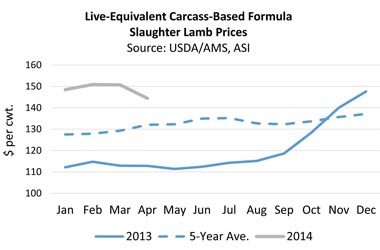 In late April, the U.S. Drought Monitor reported intensified dryness in seven western and central states. In the same report, all of California was in moderate to exceptional drought for the first time in the report’s 15-year history.
The cost of the drought in California is estimated at least $7.48 billion in direct and indirect costs, according to Mike Wade, executive director of the California Farm Water Coalition (USA Today, 4/25/14). As the U.S.’s second largest sheep-producing state what are the costs to the sheep industry? Fall-born Californian lambs are put on pastures early in the spring before going to market in late spring and summer.
Reduce forage availability means increased purchased feed costs either in traveling greater distances or buying hay and grain, or as we’ve seen, in early sell. In addition, poor nutrition to ewes might have lasting affects in reduced productivity.
Chilled Imports on the Rise
In the four months through April, lamb imports from Australia were up 15 percent year-on-year to 33 million pounds. Within Australia’s total, 64 percent was chilled, rather than frozen product. At the beginning of April, 28 million pounds of lamb and mutton, domestic and imported, sat in U.S. freezers. Stocks were 7 percent higher monthly and 59 percent higher year-on-year. Lamb importers might have to place orders up to two months in advance of arrival and under uncertain market conditions which might explain imports in our freezers.
Forecasts
In late April, the LMIC forecasted that domestic production could increase 3 percent in the second quarter and imports could fall 2 percent quarterly. The result is an expected 11 percent quarterly gain in total lamb availability (including the large volume of freezer inventory that carries into the second quarter). Exports and remaining ending stocks in the freezers will reduce this volume to some extent but still leave lamb “consumption” up a forecasted 6-percent higher in the second quarter.
On May 5, the LMIC expected national, direct lamb prices on a carcass basis to range from $305 to $310 per cwt. in the second quarter, 37 percent higher year-on-year. The live-equivalent is about $154 per cwt. LMIC expects 60-90 lb. feeders to range from $225 to $233 per cwt., up 100 percent year-on-year.
Unlike in other U.S. meat industries, lamb imports account for about half of lamb in our retail and foodservice markets. This means that in spite of tight supplies domestically, increased imports can increase total supplies which can weaken domestic prices. However, slaughter rates are high in Australia which means that at some point, U.S. lamb imports could slow as flock rebuilding efforts get underway.
Higher lamb prices will also be supported, in part, by higher beef and pork prices. These proteins are seeing record high prices, and steady demand, thus far. Tight supplies and strong exports are putting pressure on beef prices and in the pork industry, the PED disease and continued high export share have squeezed domestic pork supplies.
Higher-priced meats mean consumers will cut back or trade down in value. Restaurants will look for ways to cut costs. Jim Rob, director of LMIC commented, “White-tablecloth restaurants have adjusted the size of their steaks, making them thinner to offset the price increases,” (Associated Press, 4/20/14). Robb added: “Some places now serve a 6-ounce sirloin, compared to 8- or 10-ounce portions offered years ago. And fast-food restaurants are trimming costs by reducing the number of menu items and are offering other meat options, including turkey.
The Daily Livestock Report (DLR) commented that “the beef and pork industries remain concerned about what could happen to demand for their products should chicken prices remain low — or even decline if chicken output rises. It explains, it is these “relative” prices that impact the demand for a good, not that absolute level of the good’s own price,” (5/5/14).
Value-Based Pricing
In the first trimester, the percent of weekly slaughter that traded on formula was 24 percent compared to an average 29 percent over the past two years. By comparison, the portion of lambs sent to market that are packer-owned rose to 20 percent in the first trimmest, up from 12 percent in 2012 and 2013. The portion of packer-owned slaughter has grown this year at the expense of formula trades and purchases from auctions.
The Lamb Industry “Roadmap” emphasizes value-based pricing as a means to meet consumer demand and expand lamb demand and yet value-based pricing isn’t widely adopted in the lamb industry. In the early 2000s formula pricing accounted for about 45 percent of weekly slaughter, but dropped to under 30 percent by 2013.

There are multiple explanations for this retraction. In general, the formula is not adequately rewarding above-average quality lambs or else more producers/feeders would push for it. If packers are sending their own lambs to the market ahead of formula traded lambs then there is a risk that formula lambs gain weight and thus lose possible price premiums if heavier weighs are discounted. Second, it is possible that packers are not rewarded in the carcass and retail markets for high-quality lambs or else we’d see greater volumes priced under formula.

U.S. Wool Market Up on Back of Higher Australian Prices

U.S. wool trade was active in April and early May, with 2.3 million pounds trading on a clean basis and 1.4 million pounds reported on a greasy basis. USDA reported in early May that wool demand was good to very good and stronger following three firm market closes in Australia (5/2/14). In the three weeks before its Easter break, the Australian wool market saw a 3 percent gain each week which helped boost U.S. prices. In turn, the softer Australian dollar supported wool prices.

On average, clean U.S. wool prices in the West were an average 4 percent higher than a year ago in April while wool prices in Washington, Oregon and including some Californian wools were about 3 percent higher. By mid-May the wool market saw a small dip with some rebound by the end of the month.

In general, wool prices received by growers in the Midwest are lower than in the West because of type and quantity of wools offered. In the Midwest, the warehouse plays a larger role in sorting the wool into like packages, thus adding greater value to the end product. A warehouse sorts through each incoming clip and separates wool into over 15 grades according to micron, length, defects and type such as black-faced. Midwestern growers are paid in the grease on an estimated yield.

The U.S. Department of Agriculture Agricultural Marketing Service (AMS) reports wools on a clean and greasy basis. In this report the clean wool prices ( in tables) are typically from areas of the country where the yield of the clip is known and tend to be higher value wools. The wools reported on a greasy basis (in paragraphs of the AMS report) are usually in areas of the country where yields are unknown and tend to be lower value and shorter wools. AMS reports prices on a clean basis because it is the best indicator of the actual price of the wool and excludes the variable grease component of greasy wool prices. It is impossible to compare prices of a certain micron if yield is not known. As a result, most prices worldwide are reported on a clean basis and are more reflective of actual prices.

In the Fleece States (Washington, Oregon and some Californian wools), April prices were 3 percent higher, on average, than last May (due to no reports in April). This year there was a high percent of defective wools in California due to the drought with more tender and heavier (lower yielding) clips. As sheep are transferred from alfalfa fields to dessert, the transition in feed can produce a tender point in the wool resulting in a shorter, about 1.5-inch wool, rather than a more ideal 3-inch wool.

Disappointing winter retail wool clothing sales have some concerned about the future of wool apparel demand. When retail sales slowed in the U.S., China and Europe, wool stocks in the pipeline accumulated, further weakening raw wool demand. There is also some concern that lower sales are not just a symptom of sluggish economic recovery, but a more serious underlying trend away from woolen suits toward more casual clothing (Australia Wool Innovation Ltd. (AWI), 4/2014).