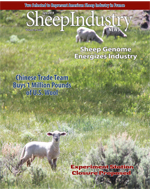 WASHINGTON — A lack of understanding by animal rights groups and small segments of the general public is being blamed for negative attention received by Wildlife Services over the role it plays in protecting American’s health, livelihoods and the well-being of other wildlife.
A June 8 Washington Post article titled “4 million animals killed by U.S. agency last year” questioned the motivations and practices of USDA’s Wildlife Services, a program supported by wildlife agencies and agricultural groups, including the American Sheep Industry Association.
“For years, the massive toll of wild animals exterminated by the federal government as a service to everything from airports to ranches has bounced up and down like a yo-yo. Last year it was up again,” the Post article stated. “Though there’s a list of animals killed, there’s little data showing the cause for each killing, the methods used and the reasons behind mistakes that lead to massive kills of animals that aren’t targeted.”
The Post article, which was subsequently picked up by the Associated Press and distributed nationally, claimed that members of Congress have called Wildlife Services “secret and opaque for failing to provide more information,” and the newspaper suggested that there are calls for an investigation into how the program operates.
But those inside USDA and groups that work closely with Wildlife Services have come to its defense, questioning the timing of the Post article and the motivations behind it.
“This is an obvious campaign by animal rights groups to disparage Wildlife Services timed to hit papers just prior to the U.S. House consideration of federal appropriations where amendments attacking the program have been voted down several times,” said ASI Executive Director Peter Orwick. “The article deliberately suggests millions of animals when nearly all control is bird damage such as starlings.”
Meanwhile, a letter to the editor written by Kevin Shea, an administrator with USDA’s Animal and Plant Health Inspection Service (APHIS), was published in the Post four days after the original article appeared.
“More than 85 percent of the animals removed last year were birds, mostly invasive species that eat crops, contaminate water and livestock feed with disease, cause damage in neighborhoods and increase the threat that airplanes full of travelers could crash,” Shea’s letter clarified. “Because of a greater number of requests for help, we removed more birds last year than in previous years, and that made up the bulk of the increase cited by the [June 8] article.”
Shea went on to point out that U.S. natural resource and professional wildlife management organizations support Wildlife Services, as does Congress through annual appropriations.
In conclusion, Shea noted that Wildlife Services recently received the Presidential Migratory Bird Federal Stewardship Award for preserving migratory birds even as it protected air passengers from bird strikes. “Wildlife Service professionals provide a service to the public using sound science and humane practices and use non-lethal means whenever possible,” he wrote. “They do not deserve derision for responsibly performing their duties.”
Wildlife Services’ primary purpose is to eradicate invasive creatures introduced from other parts of the world. They include feral hogs, starlings and other creatures that pose threats and destroy the habitats of animals in the U.S. The agency regularly responds to requests by government agencies nationwide and works to “resolve human/wildlife conflicts” in a strategic way.
“As wildlife damage increases, requests for assistance also increase,” said Wildlife Services spokeswoman Carol Bannerman.
Farmers and ranchers, state game or agriculture agencies, county government, municipal or airport management each rely on wildlife services experience to manage damage however industry pays the vast majority of any expense for control work.
In support of Wildlife Services, “ASI has filed the joint letter of support and all the background briefs with the leadership of the U.S. house to prepare for possible action in July,” Orwick said, referring to upcoming House votes on appropriations.
ASI earlier this year spearheaded the effort that resulted in that joint letter getting signatures from 169 organizations – representing a broad range of food producers, wildlife organizations, sportsmen, local governments and resource interests.
“We write in strong support of sufficient funding for this critical program and in opposition to any effort to restrict or eliminate Wildlife Services funding,” the letter to high-ranking House and Senate members begins. It goes on to note that wildlife causes more than $12.8 billion in damage each year to natural resources, public infrastructures, private property and agriculture.
“Wildlife damage to U.S. livestock, aquaculture, small grains, fruits, vegetables and other agricultural products has been estimated to reach nearly $1 billion annually,” the letter continues. “Wildlife predators cause more than $126 million in death loss to livestock; field crop losses due to wildlife total $619 million annually; losses to vegetables, fruits and nuts total $146 million annually; and 70 percent of catfish farmers incur wildlife-related damage resulting in losses of $10 million to $13 million annually from double-crested cormorants in Mississippi alone. As a result, Wildlife Services is  an essential program in agriculture production in the United States.”