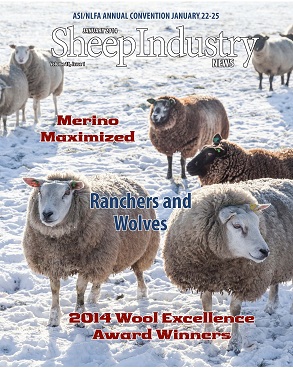 She “never planned on being a cheesemaker.” That’s the response Brenda Jensen, Dairy Sheep Association of North America (DSANA) Vice President, might give you when you ask her how she and her husband Dean began Hidden Springs Creamery, now a thriving 550-ewe sheep dairy in Westby, Wisconsin.

Brenda began her career working in business for a printing company, while Dean worked as a mental health therapist. The two expanded their business portfolio in 2003, with ewes as their new co-workers.

Though the sheep operation may not have been in their original career plan, once the couple began the dairy, they made it their goal to be successful and quickly fell in love with the cheesemakers’ way of life, today milking 550 ewes, making seven varieties of cheese and marketing their product throughout the country.

But how did the Jensens go from zero sheep a dozen years ago to more than 500 ewes today?

Brenda says the growth is a result of discussions with others in the industry, long-term planning and close attention to each member of the flock – beginning on day one.

“From the very beginning we planned to run a sustainable, environmental and financial farm,” she said. “We say, ‘take care of the flock and they will take care of you.’”

Research and Planning
Hidden Springs Creamery began with a business trip. While traveling in Europe in the early 2000s, the two stayed a few extra days to tour small farms in France.

“We both were interested in farming,” Brenda said. “The thought grew into a real idea when we saw these farms in France. The sheep dairy farmers and cheesemakers are the hubs of local subcultures; with just 20 sheep, the cheesemakers bring their cheese to the corner, sell it and sustain their farms. It really is a cheesemakers’ dream.”

Brenda put her Master of Business Administration degree to work and began researching options to begin a dairy sheep creamery back in Wisconsin. The economics and marketing opportunities in the United States proved that the two would need to build a larger flock than the farms they’d seen in Europe, to be sustainable.

After creating a business plan for growth, the two purchased 50 East Friesian and Lacaune ewes from the University of Wisconsin Spooner Research Station and began the dairy with a 12-by-12 parlor.

“Our goal was to grow to 500 ewes – and we wanted this growth to all come internally,” Brenda said. “To reach that number in a reasonable amount of time, we knew that flock management and long-term planning was very important.”

Healthy Flock Equals Quality Cheese
Much of the growth at Hidden Springs Creamery has been a result of attention and care for each member of the flock. Ewes are grazed on 76 acres of paddocks and then milked in the rapid exit 12-by-12 parlor.

During the milking season, two additional employees are on staff: one to focus on cheesemaking and the other to help with the sheep.

“The biggest thing we’ve learned is that a healthy flock makes good cheese,” Brenda says. “We work to maintain the health of our flock and that pays off in the quality of our milk.”

Brenda credits a healthy flock to the growth of the creamery, which now markets cheese throughout the United States. As the sole member of the farm’s marketing team, Brenda has made crucial connections with restaurants and stores in the Midwest and also works with distributors in New York, California and Chicago to tap into the dairy sheep cheese consumer markets.

“We make our cheese onsite at our creamery and then ship the cheese to distributors and also self-distribute to stores and restaurants in Wisconsin,” Brenda said, explaining that she hand-delivers cheese to customers in Madison and Milwaukee. “I like the personal interaction because I can talk to chefs, cheesebuyers and store workers and create intimate relationships with our customers.

“Most of the local and regional customers we work with have been to our farm and seen our sheep.”

Growing With Healthy Lambs
With demand for their cheeses at a premium, the Jensens have grown their flock to fill orders and to improve efficiency. The current goal for the producers is 2,000 ewes, a target they recently set after reevaluating the economics of dairy sheep production.

Because the flock is closed, all growth must come internally. The Jensens add new genetics to the flock with purchased rams and then retain ewe lambs each year. To continue their trend of an additional 100 new ewes each year, lamb health is key.

“In the past, we’ve had issues with lamb health, slow growth rates and mortality rates – and a big part of that comes back to nutrition,” Brenda says. “We’ve used a lot of different milk replacers; last year, we used the milk replacer that the Wisconsin Dairy Sheep Coop purchased.”

Though the product was the least expensive, Brenda said it was not the best option for their lambs, as the producers saw slow growth rates, bloating issues, a longer period to weaning and lost lambs prior to weaning.

“We learned from experience that cheapest is not always the best; you might save a few pennies, but you’re not catching up in the longrun if you’re losing sheep or your lambs aren’t growing as quickly as they should be,” she said. “This year, we had close to 700 lambs; we needed to do what was best for them.”

This year, the Jensens chose to not purchase their milk replacer with the coop’s bid and looked into other options.

“After his recommendation, we looked into the product more,” Brenda says. We liked the results that Tom and Laurel Kieffer had seen last year and Land O’Lakes had some great research to support milk replacer. It lined up as the best product for us.”

In addition, Land O’Lakes Animal Milk Products mixed the product so that it was fresh and formulated the way the Jensens needed it, when they needed it and bagged the milk replacer so it could easily be added to the farm’s auto-feeders.

“We were very happy with the new milk replacer during the lambing season,” Brenda said. “We had great success, with less bloating and faster growth. We also feel we had a smaller mortality rate.”

The combination of nine auto-feeders and the new milk replacer helped Hidden Springs Creamery to wean the majority of their lambs at 30 to 40 days, setting them up to enter the milking flock at goal age.

“We were better able to meet our goals,” Brenda says. “We saw excellent results,” she beams. “The autofeeders allow the lambs to eat when they want and keep the milk replacer fresh.”