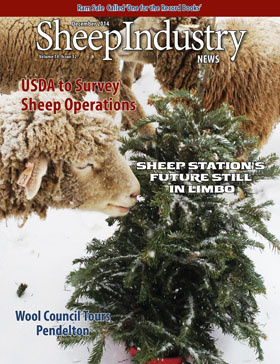 The U.S. Department of Agriculture (USDA) announced the appointment of 20 members to the National Wildlife Services Advisory Committee. Membership represents a broad range of agricultural, animal welfare and wildlife interests. Representing the sheep industry on the committee are Burdell Johnson (N.D.), American Sheep Industry; Allen Olsen (Utah), livestock/sheep industry; and Joel Dennis (Texas), Texas Sheep and Goat Raisers’ Association.  During their terms, the committee members will advise USDA on the activities and policies of wildlife services. The committee serves as a public forum enabling those affected by the Wildlife Services program to have a voice in the program’s policies.

The Department of Labor must engage in the notice-and-comment rulemaking process to set wage and housing requirements for sheep and goat herders under the H-2A visa program, but it does not have to do so on an expedited basis. The decision was made by a federal judge in the District of Columbia on Oct. 31. The ruling followed a June ruling from the U.S. Court of Appeals for the District of Columbia Circuit that the DOL violated the Administrative Procedure Act. The appeals court deemed two 2011 DOL training and employment guidance letters invalid in response to a challenge by a group of U.S. workers who said they want to take herding jobs but they do not because of substandard wages and housing conditions. Although she rejected the plaintiffs’ proposed rulemaking timeline, the judge granted their request that the training and employment guidance letters be vacated once the new rule becomes effective.

Sex of Lamb Has Impact On Meat Yield

Treating male and female lambs differently during finishing and processing can result in financial benefits, concluded a recent on-farm trial in New Zealand. Beef + Lamb New Zealand said a group of 15 top-performing North Island farmers analyzed the records for 42,000 lambs across two seasons to look for impacts of feed, breed and gender on saleable meat.  The results emphasized the importance of treating the sexes of lambs differently.  The study showed that at the same age, ewe lambs were fatter, on average, than male lambs, reinforcing the idea that “identifying different sexes and adjusting their feeding regime and timing of processing can improve the bottom line.”

Research at Kansas State University has found that sheep will voluntarily graze, and therefore could help sustainably control the noxious weed sericea lespedeza in many states. But it would require beef and sheep producers to work together to sustainably manage a noxious weed problem. In the past, it has taken costly herbicide application to get rid of sericea, which is a tannin-rich perennial legume. The latest research that examines ways to control sericea in Kansas grasslands involves two cost-effective grazing approaches.