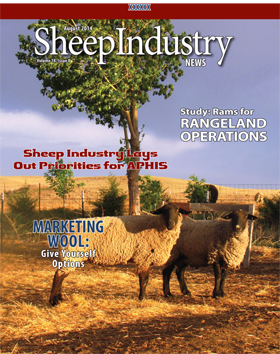 At its July 17 meeting, the executive board of ASI endorsed the budgets for the 2014-2015 fiscal year. The Wool Trust budget, the Supplemental Wool Trust budget and the Fund II budget were all approved and recommended for submission to the Board of Directors for approval. A supplemental budget was built this year to fund the bulk of the Lamb Industry Roadmap that focuses on productivity improvement of sheep. Last January, the ASI Board of Directors supported the allocation of association staff, budget and resources to the roadmap plan.
ASI President Clint Krebs noted, “This is appropriate and the right fit for ASI budgets to significantly fund the Grow Our Flock campaign and our research and education programs. Both are key to productivity improvement in the sheep industry.”
The dues rate for state association membership for 2015 will remain unchanged at 3.5 cents per stock sheep and $8 per member.
Other approved agenda items included a move to direct ASI staff to follow up with the U.S. Department of Agriculture’s Agricultural Marketing Service regarding action on proposed changes to the price reporting system for lamb.

Lamb Showing Up On More Menus

Lamb is appearing more and more on menus – and not just in fine dining establishments. According to a study by Datassential MenuTrends, “lamb has been on a steady rise in use among U.S. chains and independents with an increasing menu penetration of 13 percent compared to 4 years ago.” The study was based on data from 4,800 restaurants, including national chains, regional chains and independent restaurants, the study reports that The study notes that lamb entrée penetration has shown growth in contrast to many of the top menued proteins, which have shown declines.

A German-based producer of spun wool yarns is planning to open a distribution facility in Mount Airy, N.C. this month that will serve as the company’s first U.S. location. Südwolle Group will open the 18,000-square-foot facility. Denine Woodrow, a Südwolle Group representative, said the facility will employ four workers and has the potential to grow from there. It will serve as a central U.S. location to help Sudwolle better serve its customers in the hosiery business and provide a quicker turnaround for shipping products.