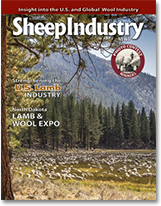 Reprinted from the Farm & Ranch Guide

(Oct. 1, 2013) Many associated with the region’s sheep industry flocked to the Stutsman County Fairgrounds in Jamestown, N.D., on Aug. 2, for the first annual Lamb & Wool Expo. Organizer of the event, North Dakota State University (NDSU) Extension sheep specialist, Reid Redden, said he was very pleased with the turnout, considering this was the first year for the gathering.

“One of the things the sheep industry in the state has lacked is an event or a place where everybody can come together,” Redden said. “This event served as a promotion for what we are doing and also offered educational sessions for those in the business or who have an interest in the products that we are producing. It was a fun and educational event for the entire family.”

The morning session offered a chance to visit the AL Ranch near Woodworth, N.D., and learn about alternative sheep grazing systems. While there, ranch owners, Brent and Codi Kuss, discussed methods they are doing on the ranch to increase grazing efficiencies. Three different areas are focused on in this attempt to boost grazing efficiencies:

Meanwhile, back at the fairgrounds, those not wishing to view the grazing system were able to rotate between three workshops being offered on cooking with lamb, working with wool and training a stock dog.

Nick Forrest, past chairman of the American Lamb Board, did a cooking with lamb presentation, creating several dishes ranging from lamb taco meat to a leg of lamb made in a slow cooker. He indicated many people in the United States have never tasted lamb, but the public is finally starting to accept it.

Finding ways to use wool was the theme of a workshop lead by Julie Mangall from the North Dakota Hand Spinners group. In addition to talking about wool quality, she focused on some of the new technologies in using wool for clothing today. Those at the workshop also had a chance to do some hand spinning.

Dog training rounded out the morning session. Although mainly focused on sheep dog training, the tips offered by Shannon Fritz, a dog trainer from Beach, N.D., could actually be used for training any dog. Using sheep in an outdoor arena, she demonstrated stock handling techniques with the help of her border collies Kim, Ty and Nick.

Afternoon Workshops
Austen Germolius, NDSU Meat Lab manager, conducted a lamb fabrication demonstration and discussed the various cuts of lamb and which works best for certain purposes. Dressing percentage for lamb usually runs in the 48 to 52 percent area, he noted, making it the lowest when compared to swine or beef. He also stressed the importance of not overcooking lamb. To those producers wishing to market their own lamb cuts, Germolius suggested staying with the easy cuts such as rib roasts, loin chops, legs and shoulders. When selecting a processor it’s important they are a custom facility. In North Dakota there are several options. First, a consumer can purchase a lamb from the lamb producer and then that lamb is processed for the customer.

Second, products from a state-inspected facility can be sold within the state or process at a federally inspected plant, which can also offer specialty items in addition to the regular lamb cuts.

Rob Maddock, NDSU Extension meat specialist, explained what to look for when selecting lamb at the meat market and the various factors that determine how a lamb grades in quality. These include things such as break joints and flank streaking. He noted that price is the prime determining factor shoppers use, but meat color is the second and lamb should have a bright, reddish pink color, whereas a darker meat color is an indication of an older lamb.

“These have been the best of times and the worst of times,” he said in describing the markets over the past couple years. “We went from record high prices to very low prices. It’s a cyclical thing and it seems every so often, every 10 to 12 years, we go through this same situation.”

Looking at the lamb markets for the last months of 2013, Petry said much of that will depend on the weather: will the major sheep producing states receive enough moisture to start building up the flock again and will there be a big corn crop that will result in lower feed prices. Longer term, consumer demand needs to come back and the U.S. economy needs to improve, which will allow for the purchase of higher value meat, but he expects that will be a slow process. In summary, he noted the fourth quarter of this year will certainly be better than that same time period last year.

The focus then turned to flock health, as Larry Holler, Ph.D., South Dakota State University’s Diagnostic Lab pathologist, shared management tips he has learned from not only is work at the diagnostic lab, but also from his experience as a sheep producer.

He especially stressed the need for a sound flock vaccination program, saying, “Vaccines are designed to reduce the incidence or severity of a particular disease.”

A sheep shearing demonstration was then given and the wool was then analyzed by the OFDA 2000, a piece of equipment that determines the fiber diameter of the wool, which is a good indicator of wool quality. The Optical Fiber Diameter Analyzer was demonstrated by Lisa Surber, the wool lab manager from Montana State University.

Keynote Address
The day’s activities concluded with a lamb supper and a keynote address by Forrest. He noted the American Lamb Board was organized in 2002 and is funded entirely by check-off funds that are collected from sheep producers.

Forrest noted he was wearing two different hats during the time of his address — a lamb producer hat and the hat of the past chairman of the American Lamb Board.

One of the problems faced by the American lamb board is the lack of funding. The total budget for the Lamb Board is $1.8 million per year, compared to $60 million in beef check-off funds, $80 million for pork and $105 million in dairy check-off funds.

“So we don’t have much money to work with in supporting the lamb industry, but we are constantly working on getting the biggest bang for our buck,” he said.

According to Forrest, 40 percent of American lamb produced goes to the food service industry, with over three-quarters of the upscale restaurants listing lamb on their menu.  The remaining 60 percent is sold at the retail level.

One of the main purposes of the American Lamb Board, in Forrest’s words is “to promote the heck out of lamb.” This is important, he noted, since 40 percent of the U.S. population has never eaten lamb. Efforts must be made to get people to try lamb for the first time and also to increase lamb sales in areas where lamb is more frequently eaten.