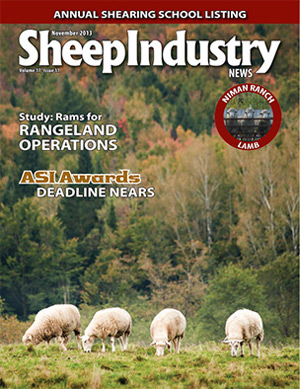 (Nov. 1, 2013) The Ogemaw County FFA Sheep Shearing Contest was held Aug. 16 at the Ogemaw County Fair in West Branch, Mich. Thirteen professional sheep shearers and three intermediate-level shearers participated in this year’s contest. The event was the final qualifying national contest to earn points toward the World Golden Shears Championships to be hosted May 20-26, 2014, in Gorey, Ireland.

The overall champion for the contest was Nolan Abel from Iowa. Abel traveled 2,000 miles with what he refers to as “The A Team” of fellow American shearers to compete in the contest. He shears 20,000 sheep annually and recommends that young people find a good teacher if they’re interested in shearing.

Timothy Wright earned the champion intermediate shearer award. Wright has been shearing since February 2012 and has set a personal goal to “get faster and more efficient” as a professional. When he isn’t shearing, Wright works alongside his family on their farm in west Michigan.

Donald Metheral of Ontario, Canada, earned the best shorn pen award. He has won the Calgary Stampede North American Sheep Shearing Challenge four times, the Denver Stock Show contest and the Ogemaw County FFA contest in recent years. Metheral enjoys traveling with his family and hunting, and is interested in hockey and curling.

Abel, Moser and Mark Hoogendoorn won the traveling team award for being the top three Iowa shearers. Between the three men, they shear about 65,000 sheep per year and they care for their personal sheep flocks.

Sy Caryl of Michigan earned the top Michigan shearer award. Caryl is motivated to shear 20,000 sheep each year by a sense of pride in what he does. When not shearing, he raises sheep with his family.

FFA members from two local chapters, the Ogemaw Heights chapter and the Whittemore-Prescott chapter, helped keep time and sort and handle sheep for the contest. Donations from local businesses and the Ogemaw Agricultural Society help support the prizes for shearers, contest judges and both FFA chapters.