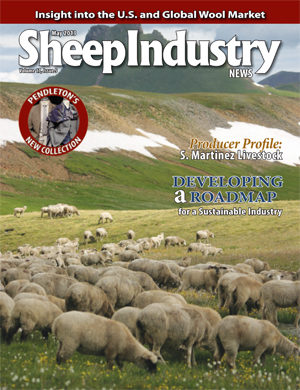 (May 1, 2013) S. Martinez Livestock based in Moxee, Wash., is in a league of its own within the Washington sheep industry. Deeply rooted in generations of sheep producers, it is the last range-sheep operation and one of the most diversified agriculture enterprises in the state.

The first of the Martinez family to raise sheep in the United States was Simon Martinez Sr., a pioneer Washington sheep producer who emigrated from Spain to the United States in 1920 as a sheepherder and stayed to become a sheepman. Simon was a determined sheepman says Mark Martinez, Simon’s grandson and one of the current owners of the family business, as misfortunes caused Simon to lose his entire flock not once, but twice. Mark recalls one of those instances being when a barge sank when transporting the flock.  But by 1970, S. Martinez Livestock was running about 12,000 sheep with the help of Simon’s sons, Simon Jr., Ramon, Danny and Mike.

When Simon Sr. passed away in the 1970s, each of his sons took on various roles at the ranch and they started to diversify the operation. The ranch today has cherry and apple orchards, raises sheep and cattle and grows hops, alfalfa and wheat. Simon Jr. specialized in the sheep production and passed his desire for the industry to his sons, Simon III, Mark and Nick. Mark, president of the Washington State Sheep Producers (WSSP), and Nick, WSSP vice president, along with their brother Simon III, uncles Dan Sr. and Mike and cousins Dan Jr. and Anthony are present day owners of S. Martinez Livestock, which is Washington State’s largest family business of its kind raising almost 5,000 ewes on private ground in addition to grazing nine active sheep allotments across four districts.

Spending a quarter to a third of every year on public lands, Mark jokes that their sheep are truck friendly. After lambing early in the year near Yakima, Wash., the ewes and their lambs spend the spring months grazing on the high desert. They are then trucked north of Wenatchee, Wash., and spend the summer grazing the Okanogan-Wenatchee National Forest with the help of ten H-2A herders from Peru. The lambs are weaned in July and shipped either to Dixon to finish at a custom lamb-feeding operation or sent back to Moxee where the Martinez’s finish some of their own lambs. The last group of ewes come off the forest in October and spend the winter grazing hay and sweet corn residue near Moxee.

“It is an ever-changing cycle,” says Mark who explains that flexibility is crucial when the sheep are on public ground.

The wildfires of last summer and fall had a major impact on their grazing lands and will continue to do so this year due to reforestation planning stages determined by various divisions of the Forest Service says Mark. “We had a fire in one of our northern allotments and it sat vacant for five years plus before we were able to get back in.

“Being the last range-sheep operation grazing on public ground in the state we kind of have a bulls eye on our back,” relays Mark referring to grazing allotments near sage grouse, bighorn sheep and wolf habitat, not to mention use of the land by recreationalists.

With the recent increase of recreationalists on public ground, new challenges arise. Nick explains, “Every group has its own mindset that the land is for them, they aren’t versed in the multi-use concept on the public lands.”

To overcome some of these issues, the Martinez’s have a long history of being very involved in the management of their allotments, including working with the Forest Service and other federal and state agencies to come up with reasonable solutions to issues associated with timber sale activity, prescribed fire, fish and water quality and wildlife management within their grazing allotments. They were recognized by the Forest Service for their dedication by being awarded the 2012 National Award for Outstanding Achievement in Rangeland Management, specifically the National Forest System External Partner Award.

Over the years they have continually worked with federal agencies on a variety of issues. A few examples include:

According to those at the Forest Service, the Martinez’s have a culture of communicating with the agency on any issues that may arise, but especially when wolves and bighorn sheep are involved.

Even though challenges in production remain, both Mark and Nick couldn’t imagine doing anything else to provide for their family. Mark says he enjoys watching a lamb being born and nurturing it through its lifecycle to produce a protein for consumption, while Nick says he likes the fact that his office’s walls are the windows of his truck.

Central Wash. State Fair’s Oldest Booth
Family involvement in the sheep industry doesn’t just stop at the fence with the Martinez family. Carol Martinez has been running the lamb booth at the Central Washington State Fair since the 1980s. Started by the women’s group of the state wool growers association in 1925, the lamb booth is the oldest booth at the fair and one of the last standing structures as most are now tents.

Carol is tasked with organizing the crews to serve the lamb, not to mention the daily setting up and cleaning of the booth during the 10-day fair.

“Everyone wants to come for the lamburger,” says Carol, who prices the burgers and ribs reasonably so entire families can enjoy the lamb. Lamburgers sell for $5.25 while ribs are $6.25. “We have had families say this is the most economical place to eat at the fair.”

Proceeds from the lamb booth are what the association uses to support their state Make It With Wool contest in addition to junior livestock shows, FFA and 4-H groups.

Each year fair attendees go through 1,500-1,600 pounds of ground lamb and more than 400 pounds of Denver ribs, which are marinated and barbecued.

Carol says she enjoys working with the volunteers who all at one point in their life or that of their relatives were involved with the sheep industry. “Working at the lamb booth is a tradition and many of the volunteers have long been out of the sheep business but have fond memories of the lamburgers,” explains Carol. “So they come back and are willing to work.”