One Skin Type Can Not Make All Things 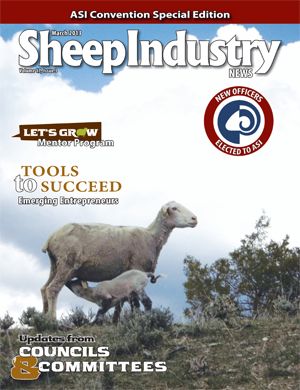 One Skin Type Can Not Make All Things

(March 1, 2013) Pelts can have a considerable impact on the value of a slaughter lamb.

“All pelts have value but no one skin can make all things,” says Mike Wheeler, president of The Nugget Company. “In most cases, U.S. pelts have more value when the producer leaves at least one inch of wool on the skin. This length provides flexibility and alternative during processing.”

Nugget has a long history dating back to 1961 when then named Southern Wool and Skin Company was processing pelts from the nearly 2 million lambs that were slaughtered in Texas each year. The company was exporting “wool on” skins as well as removing the wool from the skin (fellmongering) resulting in two distinct product lines – wool and leather. Twenty years later, the company began a direct export program to the former Soviet Bloc of “dressing skins.” These varied processes complemented each other and eased sourcing issues.

With most U.S. skins having more value with the wool left on the skin, along with the continued decline of supply, it was virtually impossible to attain sufficient raw stock to adequately merchandise all of the lines of production necessary to successfully operate a fellmongery. Therefore, in the mid 1990s, Southern Wool and Skin Company began to move out of pulling and started experimenting with tanning sheep and lamb skins leaving the wool on.

Today, The Nugget Company is an exporter and tannery supplier providing both raw and finished products to its buyers. Nugget also consults on the processing of domestic materials and offers custom tanning on wild and exotic game animals.

The process of tanning is a multi-step progression that can be very time and labor intensive. Therefore, about 80 percent of Nugget’s domestic skins are exported in the dry-salted state with the remaining skins being processed in Texas. Wool density is a major determinant in deciding if the wool should be left on the skin or removed from the skin prior to tanning. There are multiple uses for both products as the chart on the next page demonstrates.

“As most American skins go, ideally, a lamb will be shorn 90 days prior to being killed,” states Wheeler. “This practice gives the wool sufficient time to grow back to approximately 1 inch in length allowing for maximum versatility in the processing phase.”

When asked about how to have a better understanding of the pelt market, Wheeler says, “One of the first things to be aware of when trying to understand the pelt market is that it is a global market. The United States raises 3.34 million sheep, less than one-half of 1 percent of the global supply of sheep and lambs. From this, you can see that weekly increases or decreases in U.S. slaughter numbers have very little impact on the global supply of pelts.”

One of the challenges in marketing American skins is that with the many breed varieties come many different types of pelts.

“Multiple breeds and declining numbers make it difficult to assimilate enough of one type of skin to merchandize to a tanner for production of a certain item. You need volume to satisfy a line of production to be commercially viable.”

The market has a certain level of volatility. There are times when double-face skins are in higher demand so countries like Spain, the UK, Ireland and France that are known for these types of skins will experience higher relative pelt markets. In reverse, pelt markets in Australia and South Africa reflect stronger positive trends when single-face skins are sought.

Australian pelts, he said, are generally best for single-faced products (skins that are finished on the wool side only). The UK and Ireland have very clean leather, but the wool is poorer quality thus the skins primarily do best in middle-weight leather double-faced items. Spain, Wheeler says, has the best skins in the world if or when high-end, light-weight ladies garments are in vogue.

Ultimately, demand is created by the consumer and the desired end product. China is the largest importer of sheep skins, importing both single-face and double-face products. Single-face skins are made into car seat covers, paint rollers, rugs and linings. China makes the bulk of the world’s lambskin footwear from double-face skins.

Russia is the second largest buyer of lamb skins. They are consumers of single faced pelts where garments made with the wool on the outside are very much in demand.
Next in line is Turkey. Turkey produces some of the world’s sheepskin footwear and most of the world’s high-end, high-quality double-faced garments.

“It is important to realize that all skins have their unique general characteristics,” says Wheeler. “Pelts from particular origins are more suited for certain categories of end products. For example, American skins are generally well suited for footwear but not so great for fine ladies garments because they are typically too heavy.”

Beside demand, other influencers that affect the skin market are weather, politics and currency parity. Sheep and lamb skins are predominantly cold-weather friendly; therefore, the warm winter of 2011-2012 in the United States, China and Russia resulted in an excess supply of jackets and footwear. Countries can also impose duties and tariffs on certain imported products making some markets more appealing than others for trade. Finally, with a global skin market, the strengths and weaknesses of various currencies impact demand.

Market Situation
Currently, China is very aggressive in the market. “They can go in and out of the market so fast and have such a big impact,” comments Wheeler, “that we are not sure if they are here to stay, but they have been very strong the last six weeks.”

The U.S. pelt price is trending upward. Australia is also showing rapid price increases. South Africa, Spain and France all have firm markets but are short on numbers. Turkey has also become aggressive in the market and is again accepting more pelt volume.

This discussion leads to the question that every U.S. producer would like answered: Are American skins the best in the world? According to Wheeler, the answer is “sometimes, for some products.”

While American skins are well known for their size and durability, there are also characteristics that can adversely affect their value. When examining the wool side of American skins, black fiber content, loose, open and stained wools all have negative consequences since these imperfections limits the tanner’s options and what finished products can be produce. If, for example, the wool color on the finished product needs to be white or pastel, tanners will tend to choose pelts from origins like Australia and South Africa that are known for their white wool characteristics.

If the final product to be made needs large cutting patterns or firm, heavy leather, American skins become the focus. As an industry, if we can work to improve some of the problematic traits of American skins, then we might be able to make the claim that American skins are the best in the world.

“We’re optimistic that pelt credits will continue to increase for the better types,” concludes Wheeler. “We want producers to know and understand the market so that they can be successful. We can’t be successful and stay in business unless the producer does so first.”