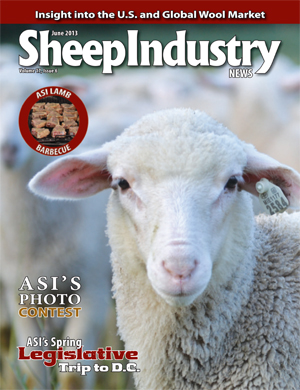 (June 1, 2013) During their annual trip to Washington, D.C., producer leaders with the American Sheep Industry Association (ASI) spent the morning of May 7 at the U.S. Department of Agriculture (USDA) in dialogue with officials from many of the agencies that partner with the association for programs important to wool and sheep production.

“The department came to report and listen to the needs and the concerns of the industry,” began Clint Krebs, ASI president. “Multiple speakers from seven different agencies made themselves available for discussion and questions from the nearly 40 sheep producers in attendance at USDA.”

“I understand that the sheep industry is being confronted by a lot of challenges beyond imports and predators,” said Edward Avalos, undersecretary, Marketing and Regulatory Programs. “Things like lamb prices and high feed costs come to the top of my mind. I am here to let you know that the staff at USDA and I are here to support you. Our top priority is to keep the farmer on the farm.”

Avalos pointed out the many tools the agency has available to assist the industry, from knowledgeable, committed employees and Section 32 funding to commending the sheep industry for maintaining long-term relationships with USDA. He referred to a blog that he released that week discussing a multi-faceted approach to supporting the sheep and lamb industry. To read the blog, visit page 10.

“We are committed to using every tool in our tool box to support the sheep industry,” Avalos concluded.

John Clifford, DVM, deputy administrator for USDA’s Animal and Plant Health Inspection Service’s (APHIS) Veterinary Services (VS), began his presentation by updating the producers from nearly 20 states that the measured prevalence of scrapie has been reduced by 96 percent since 2003. The prevalence of scrapie is now .006 percent or, more clearly stated, only one in every 20,000 sheep is inflicted with scrapie. There are currently four confirmed cases of scrapie in sheep and goats in the United States – three in sheep and one in goats.

Revisions to import regulations for sheep and sheep products should be published for comment by the end of the year, according to Clifford. Sheep and sheep product export opportunities will become easier to address when the World Organization for Animal Health (OIE) changes the BSE classification for the United States. A vote on a new BSE classification for the United States was expected at the OIE meeting at the end of May.

Clifford stated that he was very pleased with the work of the federal-state-industry partnership that has led to the current low prevalence of scrapie and that the hard work through those joint efforts, along with past appropriated federal funds, got us to this point. He also commented that as the prevalence of scrapie reduces, it takes more surveillance to find the last pockets of infection (a needle in the haystack scenario) and, thus, more funding is needed in the future.

Commenting on sheepmeat exports, Clifford stated that he has met with Foreign Agriculture Service (FAS) and U.S. Trade Representatives staff and expressed APHIS/VS willingness to proceed with those agencies towards efforts to open trade channels.

Morris emphasized his excitement that AMS and the industry, through funding received from ALB and NSIIC, will be conducting a field trial very soon on the instrument evaluation of lamb carcasses. The project will be a two-phased approach to hopefully finalize an AMS voluntary standard for yield and quality and to evaluate the benefits and return on the investment to the industry.

AMS continues to analyze the current Livestock Mandatory Reporting (LMR) system for lamb and how it can make more lamb marketing data available to the industry. Some new reporting recommendations will require a change in the regulations; therefore, the importance of open dialog between the industry and the agency at this time was stressed.

Current discussions include updating regulatory guidelines to better reflect the current industry structure by adjusting the reporting volume thresholds, changing report categories and descriptors to reflect current marketing practices in an effort to provide more accurate and usable market information and consolidating reports and/or sections of reports (internal and external) to ensure market data is reported.

“We appreciate the hard work that Secretary Avalos and Dr. Morris are doing for the industry,” mentioned Krebs. “They are in the process of making changes to LMR and acknowledged our request for a $5 million section 32 purchase to help strengthen lamb prices at the farm and ranch gate that continue to be under the cost of production.”

“I am familiar with ASI because of the wool programs that are funded through our Market Access Program, Quality Samples Program and Foreign Market Development program,” began Suzanne Heinen, administrator, FAS. “I would look forward to the same relationship with your industry if we are able to move lamb trade forward through FAS.”

Exports to Japan, Taiwan, Korea and the European Union (EU) were discussed as the sheep industry has identified these markets as high-priority export opportunities for lamb. Japan has restricted lamb imports because of the incident of BSE in an imported cow back in 2003. Even though some categories of beef have since been approved for import, lamb remains locked out of this market. Japan is expected to continue to expand its list of importable products as it opens up its borders to more U.S. goods.

Opening up lamb exports to Taiwan is in progress. APHIS has completed its portion of a questionnaire received from Taiwan to allow lamb imports and has forwarded the paperwork on to the Food Safety Inspection Service (FSIS) to finalize the document.

There are a number of challenges when looking into the European market. The EU runs a hormone-free program. Even though there are no sheep-labeled hormones sold in the United States, because there is one registered for this country, the current EU regulations disallow sheepmeat imports. It will likely be necessary to either use a certification program, as is done in the cattle industry, or eliminate the approval of the product in order to enable exports to the EU.

“The news that the sheep industry could be losing the wool research lab in Pennsylvania after the scientists were able to make a breakthrough on keratin research that the rest of the world has been trying to come up with for years is very disappointing,” related Krebs.
The research to understand the relationship between domestic sheep and bighorn sheep continues to move forward. Kappes iterated that with 48 percent of all domestic sheep spending some time on public lands, this remains a critical area. The sheep industry provides an economic benefit of $232 million at the farm gate and $576 million in supported economic activities.

One of the latest findings is that bighorn sheep are not necessarily more susceptible to pneumonia than domestic sheep; their immune system has less exposure to it than other animals, which results in a much different outcome. The next step in the research is to do more proximity testing in range environments versus in confinement and investigate potential mitigations to disease development.

Other sheep projects underway across the country include an easy care sheep project targeted to reduce labor costs, identifying the genetic marker to reduce the risk of ovine progressive pneumonia, including lifetime productivity and parasite resistance.

When quizzed about the future of the U.S. Sheep Experiment Station (USSES) in Dubois, Idaho, Kappas delivered the news that he doesn’t believe the USSES is currently in a good place to face the future. The agency has been forced to spend $2.5 million defending USSES from lawsuits and environmental policy imposed by anti-sheep and anti-grazing activists.  Thus, combining budget cuts, law-suits and retirements, the station and its resources will need to be reconfigured to keep it functional and moving forward.

Montana producers expressed their concerns about any thought of closing this important research station to the sheep industry and posed the question about the possibility of collaboration with other grazing sites to at least keep the research activities moving forward.

“Although no conclusions have yet been determined, to date, we have not identified any market manipulation,” said Mitchell. “We will continue to review all of the data and look at any contradictory information in hopes of completing our report by the end of May and making it public after that.”

He believes the result of the investigation will show that a number of factors caused the price crash including the severe drought in the United States, weather patterns across the world, the value of the U.S. dollar in the international market, the number of lambs in feedlots and the number of large lambs, to name a few.

Covering the issues within APHIS’s Wildlife Services (WS) was Janet Bucknall, deputy director, Wildlife Operations. WS is one of the few agencies anticipating an increase in funding for the next fiscal year to cover a program to reduce feral swine in 35-38 states.
WS is also field testing European breeds of guard dogs for use against wolf depredation in Montana as a pilot. Additional breeds of guard dogs will soon be coming to the United States to be field tested in Idaho, Wyoming or Washington.

According to Bucknall, WS is on the brink of field testing para-aminopropiophenone (PAPP) on coyotes. PAPP is being pursued as a complimentary tool to the other predacides available to ranchers. It is expected that trials will begin in 2014.

“Our industry has friends at USDA,” concluded Krebs. “We appreciated the progress report on our requests to support the lamb market.”