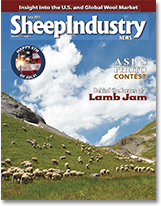 
(July 1, 2013) Thirty sheep shearers and ten wool handlers participated in the seventh annual Miles City Bucking Horse Sale Sheep Shearing Contest on May 18. The group represented some of the best from the United States as well as New Zealand and Australia. American shearers traveled from both coasts, Oregon and Maryland to participate in the event.

Along with the sheep shearing contest, the venue was host for the National Wool Handling Contest. The competitors in this contest were competing for the chance to represent the United States at the 2014 World Wool Handling competition to be held in Ireland.

The event held at the Agrisports Barn on the Eastern Montana Fairgrounds saw more than 200 spectators. They were there to watch the top four professional shearers as they each shore eight sheep in the final round. The shearers were scored on how cleanly they sheared along with a score for the speed at which they worked.

“Loren is coming down the last side,” the emcee yelled as Loren Opstedahl of Piedmont, S.D., finished off one sheep and turned back to the pen for another. Opstedahl finished first overall in the professional category, which means he had the lowest amounts of penalty points and best times among the competitors. In the final contest, he sheared eight sheep in 11 minutes and 4 seconds.

Shearers at this competition competed for mostly bragging rights with a jackpot award provided from the entry fee each shearer pays to participate along with additional awards provided by sponsors of the contest, which include the American Sheep Industry Association. Top shearers also received sheep shearing gear and awards from the shearing gear suppliers in the area McWilliams Shearing and Supplies of Miles City and Heiniger Shearing Equipment of Buffalo Wyoming.

The 250 sheep that got fleeced came from Dave and Ruth Hinnaland who raise sheep and own a trucking business near Brockway, Mont.