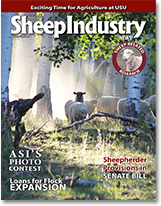 (Aug. 1, 2013) A highlight of having Utah State University (USU) host the 2013 meeting of the NCERA-214 Coordinating Committee meeting was visiting the research farms and labs at the Utah Agricultural Experiment Station. Although the experiment station maintains or supports a number of research facilities throughout Utah, one lab in particular the committee learned a great deal about and how its research impacts the sheep industry is the U.S. Department of Agriculture’s Agricultural Research Service Poisonous Plant Research Lab.

The mission of this lab, which was started in the mid-1950s, is to identify toxic plants, isolate and identify plant toxins, determine the mechanism of toxicity, document toxin metabolism and clearance from tissues, develop diagnostic and prognostic procedures, identify conditions of poisoning and develop management strategies, antidotes, treatments and other recommendations to reduce losses, insure product quality and promote animal and human health. What makes this lab unique is its team of chemists, geneticists, pathologists, physiologists, plant and range scientists, toxicologists and veterinarians that provide an interdisciplinary approach of applied and basic research to develop solutions to intoxication. This research information is used by the livestock industry, wildlife managers, nutritionists, veterinarians, physicians, poison control centers, scientists and other state and federal agencies.

“The point of having all these disciplines in one location is to have various areas of expertise to feed into more solutions that will advance our research and provide solutions to the livestock industry,” according to Jim Pfister, animal and range scientist, who says the total annual losses in the U.S. livestock industry due to toxic plants exceed $300 million. This accounts for death, impaired gains, abortions, birth defects and indirect losses such as veterinarian costs and changes in management.

Locoweeds
Locoweeds contain swainsonine, which according to Pfister, is a potent toxin that affects any mammal. Locoweeds are commonly found on mountains, foothills and plains and in semiarid desert regions. One of the most recent research findings is that the toxicity of the plant originates from a fungal endophyte which produces the indolizidine alkaloid swainsonine, and without this endophyte, says Pfister, the plant itself is not toxic.

Locoweed poisoning affects livestock neurologically and reproductively. Pfister says that if ewes are ingesting these plants during gestation, the offspring are severely affected. Other effects on the female reproduction system include abortions, reduced maternal responsiveness, developmentally impaired lambs and lack of nursing at birth. Swainsonine also effects the male reproduction system.

Signs of locoweed poisoning will disappear in time when animals stop eating the plant if they haven’t crossed a critical threshold, according to Pfister, who says, “There is essentially a threshold and once livestock pass this level, they are severely affected in terms of brain lesions. Once consumption of locoweed stops, swainsonine is rapidly cleared from the body.”

Due to the effects, Pfister says is it best to avoid locoweed during pregnancy, use intermittent grazing patterns, take breeding males off locoweed for at least 90 days before breeding season and be able to provide clean pastures when animals start to eat locoweed.

Lupines
Sheep in western states are frequently poisoned by feeding on toxic lupines. Although the amount of lupine that kills an animal varies with species and stage of plant growth, it’s not safe for sheep to graze lupines that contain toxic alkaloids.

In cattle there is a syndrome called crooked calf disease that occurs when pregnant cows eat lupine during days 40 to 100 of gestation. These birth defects, called multiple congenital contractures, occur due to the lack of fetal movement. “They become frozen from the lupine,” says Pfister. “And after spending one to two weeks in a certain position, birth defects occur.”

USU researchers have determined that a cleft palate develops in days 40 to 50 of gestation in cattle. Research Leader Kip Panter has developed a method to induce cleft palates in goats, thus providing a way for biomedical researchers to practice repairs to the palates in utero.  Human surgeons are seeking permission to do the procedure in babies with identified cleft palates.

False Hellebore
According to Pfister, false hellebore, or veratrum, was one of the plants that helped to establish the foundation of the Poisonous Plant Research Laboratory. He says that from the early 1900s to the 1950s, there were severe problems with what ranchers called “monkey-faced” lambs in northern Utah and central Idaho. For many years, ranchers thought it was a genetic defect. In the 1950s, a research study was conducted to determine what was causing the defects The source was zeroed down to the false hellebore which causes a cyclopian-type (single eye) facial deformity in the offspring. Researchers determined that cyclopia occurred in day 13 or 14 of gestation and other deformities occurred if veratrum was ingested by a ewe later in the gestation cycle.

“For the sheep industry, it was a really simple solution,” says Pfister, “just don’t turn out your pregnant ewes basically for 30 to 40 days after the rams have been in with them. There were simple solutions for sheep from this research, but it had other biomedical implications later on.”

In 1998, biomedical researcher Philip Beachy tied cyclopic lambs reported in the 1950s in Idaho to the Sonic Hedgehog gene, which plays an integral role in cell division including the development of a normal face (symmetrical halves) in his cancer research. This gene is dormant in most adults; however, it is activated in cancers and results in uncontrolled growth of cells. From there, tests were completed that demonstrated decreased tumor growth in cyclopamine-treated mice. Thus, cyclopamine and cyclopamine derivatives have been targeted as potential pharmaceutical treatments for certain cancers.

“Basically it is something that was once very ugly turned into something good,” says Pfister.