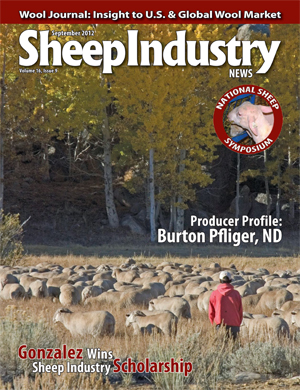 (Sept. 1, 2012) In a year of wildfires, drought and economic struggles, livestock producers and rural businesses need all the help they can get, especially from people who understand.

The National Livestock Producers Association’s (NLPA) Sheep & Goat Fund has been providing that help since 2000. Richard Drake and Pierce Miller were there from the beginning and have played key parts to both developing the loan program and to the unique and innovative program’s enduring success.

The fund started out with $14 million to loan to sheep and goat businesses that had the foresight and will to try an unconventional loan program to improve their operations. Since 2000, that $14 million has revolved into more than $32 million in loans to sheep dairies, wool mills, meat processors and other sheep and/or goat-related businesses in 20 states.

Both Miller and Drake said they see some future changes in agriculture financing because the capital needed to run an enterprise today has increased many times and can be difficult to obtain. However, they pointed out that the NLPA Sheep & Goat Fund is ready to loan money to the industry while other capital will come from corporate farming and ranching.

“There is a lot of money looking for the right agriculture enterprise to invest in,” Drake said. “Investors know that agriculture has a future and that the rate of return is good if the business model is correct.”

Both men understand the struggles of the sheep and goat industries, because they too deal with them every day. Pierce Miller of San Angelo, Texas, a fourth-generation rancher and energy producer in Crockett County, and Richard Drake of Windsor, Colo., a well-known lamb feeder with farming and milling interests, have known each other since their youth. Today, both serve on the NLPA Sheep & Goat Fund Committee and also have leadership roles with other related industry organizations.

Drake and Miller helped in the development of the fund and have been on the committee since the fund made its first loan in 2000. Drake has served as the chairman of the committee since 2003. Both put their support in the fund because they recognized the value it could bring to the struggling sheep and goat industries.

Both understand that innovation, understanding and flexibility are crucial to today’s agriculture enterprises. The fund is geared toward projects that are forward-thinking and innovative and projects that are looking to take their businesses to the next level, adapting to their industry’s market structure.

Drake is a native of West Texas where his father was a leading sheep buyer and partner in a livestock auction company and where an uncle was a buyer for a leading wool company. He attended the University of Texas about the same time that Miller was a student there. Their industry involvement has been in all areas of production, processing, marketing and finance.

While the men have had past differences of opinion concerning certain programs affecting the industry, both have remained close friends. Each is proud of their individual involvement in agriculture and each is optimistic about the future.

“I am a realist,” said Drake. “The industry needs to better its customers and learn how to serve the customer’s needs.” Miller agrees, and said that the sell and consumption of lamb and other industry products must provide “enough return for us to stay in business.”

Drake said he believes in the future of ranching and farming but he also recognizes that “a new model has to be constructed to achieve more production with higher costs and less resources.”

“If a rancher or farmer is to exist in Texas or in other parts of the country, that person is going to have to adapt an enterprise model that fits his or her land and not one that is the norm of what the neighbor does,” Drake continued.

Both men noted that the world is faced with a protein deficiency, thus the market for lamb should continue to be strong but can the price of these meat animals provide enough return for producers to stay in business.

After experiencing the driest summer on record in Texas and most of the Southwest, Miller said that weather is another factor that producers must consider in their land management programs. “We must learn to be better managers,” he said, noting that the price of fuel has soared so high that transportation costs also makes decisions more critical.

Drake and Miller bring an enormous amount of financial experience to their positions on the NLPA’s Sheep & Goat Fund Committee. Drake, who calls himself a “shadetree economist,” started out working at the feed yard owned by the late John Cargile near San Angelo until he was called into the Army where he served six years. After discharge he returned to San Angelo and went to work for San Angelo Packing until it was purchased by Wilson Foods, Inc. He spent 17 years with Wilson, ending up in the Denver plant where he was in charge of lamb procurement. When Wilson closed its Colorado plant, the firm wanted Drake to move to Albert Lea, Minn.

“No one leaves Colorado for Minnesota,” he observed. “I started my own company of feeding lambs and have been doing that for many years.” He said he had expanded his business into farming, having an alfalfa pellet mill which serves the lamb feeding industry in Northern Colorado. His interest and commitment to the industry led him to start writing a market newsletter about the sheep industry while with Wilson in 1976. He has continued to write the newsletter each month since that time.

Before assuming daily operations of the family VIP Ranch Company and becoming president of Moleo Gas Corporation, the family gas production company, Miller joined Fort Worth National Bank in 1964 and San Angelo National Bank in 1966, resigning as chairman of the board, CEO and president in 1981. He has served on a number of boards and as president of some half-dozen livestock industry organizations, including being vice chairman of the Texas Board of Criminal Justice, which operates the nation’s second largest prison system.

Funds are available through the NLPA Sheep & Goat Fund to qualified applicants at a competitive interest rate. More information is available at  www.SheepandGoatFund.com .