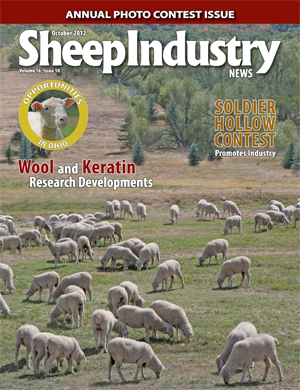 By AMY TRINIDAD
Sheep Industry News Editor
(Oct. 1, 2012) Ohio’s Appalachian Plateau, located in the eastern part of the state, is made up of rolling hills, steep valleys and unique soils. Farming in this part of the country can be challenging because of these characteristics but one sector of agriculture that is well suited for this land is sheep production.
Research for the sheep industry is a top priority at the Eastern Agricultural Research Station in Noble County where Daryl Clark spent 28 years as the county extension agent. Although Clark retired in 2008, his work as a sheep producer and mentor has continued.
One community in particular that has grown from Clark’s knowledge in the sheep industry is the Amish, who moved into eastern Ohio from northwest Pennsylvania because land was getting too expensive to make a living on. They moved as saw mill operators but due to claims from the Environmental Protection Agency (EPA) that the Amish community was polluting the streams and air, the community was forced to look at other options to make a living for their families.
Clark recalls the first time he met Joe Miller and his father, Allen Miller, in 1999 at an Amish community meeting. They were seeking advice from the county extension office, in which Clark was representing, regarding the EPA claims and inquired about livestock production, specifically raising sheep.
“I remember them saying to me, ‘we aren’t farmers, we are saw mill operators and we need help.’ Now, this group of people thinks that raising sheep is the best thing that has ever happened to them,” relays Clark, the current vice president of the Ohio Sheep Improvement Association.
Joe and his brother, Adam, are two in this Amish community that have utilized Clark’s knowledge in the industry to their benefit. Joe, the eldest, has been raising sheep for a number of years and has maxed out the number of sheep he can raise on his 160 acres of land.
“The reason I started with sheep is that I can feed five ewes to one beef cow on my pasture and have a better profit in the end,” he explains, plus he says his children can help with the sheep.
On the other hand, Adam has only had sheep on his farm for a little over a year and lambed 126 ewes this past spring. Getting out of the dairy heifer business, Adam was enticed by the economics of sheep production to provide for his family, plus as he states, “We can’t do a lot of things in these hills, but we can raise sheep.”
Clark wears a lot of hats when it comes to helping the Amish community regarding their flocks, but the No. 1 and most important hat is that of educator.
“Whenever I have a problem,” says Adam, “Daryl is the first guy I call.”
Over this past year, Adam says he has been through a number of learning experiences, but the key to his success thus far has been the assistance of a mentor helping him get started right.
To help producers get started in the sheep business, Clark has put together what he describes as a blueprint. “When starting out in this business, people need to know what their goal is. If that’s making money, then there are certain things you don’t need to be involved with,” he explains.
Some of the main points in his blueprint include:
According to Clark, there are several Amish populations across the state of Ohio that are becoming very involved in sheep production and being a source of useful information to help them succeed is something that Clark enjoys.
Menu