Campaign for Wool in the USA 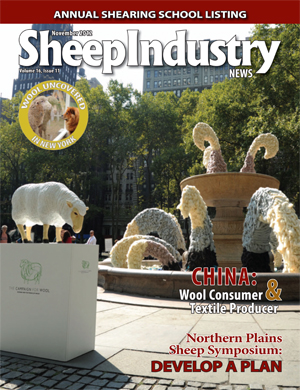 (Nov. 1, 2012) Manufacturers, retailers, designers and wool producers joined together to launch The Campaign for Wool for the first time in the United States on Sept. 27 to revive the nation’s understanding and interest in wool, increase consumer demand and educate consumers about its natural benefits.

Sheep were the talk of the nation as they were brought into the world’s most energetic city, New York, to graze freely and play center stage in a stunning installation called ‘WOOL UNCOVERED’ which transformed the famous Manhattan outdoor living space — Bryant Park — into a woolen wonderland.

The lawn became the sheep’s meadow for the day and the famous Fountain Terrace was turned in to a luxurious Wool Salon with beautiful richly colored carpet and a stunning wool bed. There was no water in the fountain – instead it spilled over with wool and yarn and the trees were adorned with wool art. In addition, a series of talks were given by leaders in the fashion and interiors industry including acclaimed interiors designer Steven Gambrel, Esquire’s Fashion Director Nick Sullivan and Co-Founder of Timo Weiland Alan Eckstein.

Extensive video of the event is available atwww.epklink.com/campaign forwoolus.
“The whole point of wool week was to raise awareness and to tell the world that here is a wonderful fiber that is produced naturally, is endlessly renewable, totally sustainable and comes off the back of sheep that graze the most difficult areas you can find. Sheep put fertility into the soil and provide meat and fiber,” says John Thorley, chairman of the Campaign for Wool.

“The American Sheep Industry Association (ASI) has supported the Campaign for Wool for a number of years and continues to contribute to this worldwide wool promotion,” says Rita Kourlis Samuelson, ASI wool marketing director. “We were pleased to bring the major attraction – live sheep – to the Campaign for Wool debut in New York City. As you can imagine, working through the details of delivering live sheep into the heart of Manhattan presented its own set of unique challenges. The huge success of the event made it all worthwhile.”

New York sheep producers, Jeff Traver and T.J. Baright from Dutchess County, rose to the challenge and delivered the stars of the show — the flock of 30 sheep. The animals grazed on the spacious lawn of the park and were the centerpiece of innumerable photos.

“All of us from the United States that participated in this event have been involved in many different approaches to bring the message about where wool comes from and the types of products made from wool to the end user,” says Tom Colyer, vice chair of ASI’s American Wool Council. “However, I have never been involved in one of these events that has had as much of an impact as this event. We had thousands of people make their way through the displays and view the sheep. We were interviewed 30 or 40 times by the different New York media outlets. It was well, well worth the effort.”

Media outlets from the New York Times, Fox News, CBS, NBC, Taxi TV and the Wall Street Journal all featured articles and photos of this outstanding event in Bryant Park.