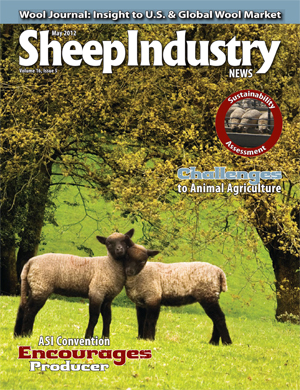 (May 1, 2012) Every year, the American Sheep Industry Association (ASI) holds a membership contest for the state sheep associations. Last year, the association that won the category for the largest percentage increase in membership was the Michigan Sheep Breeders Association. The reward: A free registration to ASI’s annual convention this past January.

The association was excited to learn the news for the hard work in driving membership; however, the board was puzzled at first as to whom to send as they include the ASI state director convention registration fee in their yearly budget.

“We really wanted to take advantage of this situation,” says Dale Thorn, the ASI state director for Michigan, explaining that they had scheduled a new producer panel at that particular state meeting. “We thought it would be great to send one of the panel participants to the convention to let them experience a bigger picture of the industry.”

Although the panel was full of impressive candidates to provide this opportunity to, one in particular stood out for his excitement and enthusiasm for the industry, that person is Tyler Martin, a 21 year old from Remus, Mich.

“Tyler is a sharp young man with big ideas,” explains Thorn. “He started in the sheep industry as a boy with a small 4-H flock. He has grown it into a club lamb flock and is now taking the next step to develop a commercial flock.”

“I was honored that the board chose me for this opportunity,” says Martin about being selected. In addition to covering his registration costs, the state association also paid for his travel expenses providing him with an all-expenses-paid educational opportunity to learn about the industry on a national level.

Growing up on a farm with livestock and row-crop farming, Martin found himself missing that lifestyle once in college. After giving the college life a go for a year, Martin decided he wanted to stay “on the farm” and help his family expand their operation. This decision was the turning point for the Martin family.

In addition to raising sheep and crops, currently Martin and his parents, Duane and Tina, work full-time at LOR Products Inc., a metal fabrication shop. However, it is their goal to grow their flock of 300 ewes to a total of 1,000 ewes over the next three years in order to make sheep their main form of income.

This decision did not come lightly, but after Martin’s attendance at the ASI annual convention, his love and dedication to the industry were only confirmed and made stronger.

“Going to the ASI convention opened my eyes to many new ideas,” he explains. “When I got home from the trip, I was bound and determined to start my own farm. This opportunity made me realize that I want to get more involved with the Michigan Sheep Breeders Association and ASI.”

Martin has turned this goal into reality. As of April, he is renting 80 acres a couple miles away from his parents’ farm which includes a home, barn and 60 acres of tillable ground for his own hay and corn in addition to grazing land for growing his commercial flock of Polypay/North Country crosses.

“With the option to buy the farm down the road, this situation provided me with the opportunity to get a feel for it and see how it works out instead of just jumping in really deep water right away,” he explains.

Coming from a young adult with no credit history who has chosen sheep production as his career, he has struggled to find lending options to help him grow his flock.

However, he has found that the U.S. Department of Agriculture’s Farm Service Agency and United Producers Inc., a farmer-owned and operated livestock cooperative that provides livestock marketing, financial and risk management services, have options to help young farmers. His best advice to those looking to get into sheep production is to “pencil everything out” and take the time to learn from others within the industry.

Martin urges other young sheep producers to attend the ASI convention expressing that he learned a great deal from the first-ever emerging entrepreneur session but the main thing that helped him pursue his dream of acquiring his own farm was “soaking in the knowledge from other producers from around the country.”

“There aren’t a lot of full-time sheep producers making their entire living from sheep in Michigan,” explains Thorn. “Tyler’s ambition to make sheep his main income impresses me. Although he is young, he has the right kind of thoughts about growing his sheep business.”

Now that the Michigan Sheep Breeders Association has reached out to some of the state’s emerging producers, the board is contemplating designating a young shepherd position. In addition, due to the success they realized from Martin attending the national convention, Thorn is also pushing to designate money in each year’s budget to help a young producer attend the event.

“What a cool program to get implemented on a national level if other states would participate. Not only does a great deal of idea exchange occur at the ASI convention but one can also learn a great deal about animal health and legislative issues,” says Thorn.

As for Martin, he hopes to expand his participation in not only the state association but also with ASI. In fact, he was excited to learn about being selected to sit on ASI’s Emerging Entrepreneur Committee for the next year.