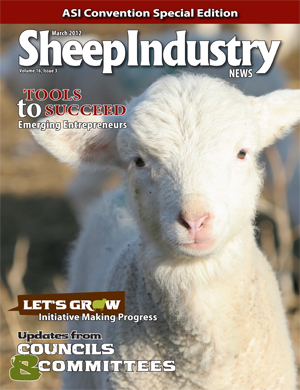 (March 1, 2012) Nearly two dozen young producers got a taste of the challenges facing day-to-day sheep operations from experts in the industry during the inaugural “Emerging Entrepreneurs” gathering in Scottsdale.

Evidence of the enthusiasm of these young producers, between the ages of 25 and 40, is that more than half said they want to help plan the second emerging entrepreneurs program next year in San Antonio.

“This group is the future leadership of the industry and will have a large impact on the industry’s direction in years to come,” said John Cubiburu, of California, who challenged them not only to come back next year but to bring someone new with them. Cubiburu is co-chair of the Emerging Entrepreneurs with Burdell Johnson of North Dakota.

“Coming out of this, we want to expand,” said Johnson. “As this is the first, there’s no tradition. We can be emerging, and that’s why we organized it this way.”

Levi Brown, a 30-year-old producer from southwest Colorado, said he met some great people at the American Sheep Industry Association (ASI) convention and made some great contacts for his business raising Rambouillet ewes.

“One thing that stood out to me is that ASI is trying to involve new people into the industry,” said Brown. “I would like to see more focus on the younger generation of sheep ranchers.”

Twenty-one-year-old Tyler Martin, who grew up on a Michigan sheep, cattle and poultry farm, said he found the ASI meetings inspirational.

“Going to the American Sheep Industry has opened my eyes to many new ideas,” said Martin. “When I got home I was bound and determined to start my own farm, and I will buy it in April of 2012.”

He said attending the ASI convention helped him realize that he loves raising sheep and wants to get more involved in ASI and the Michigan Sheep Breeders Association.

“I have contacted Bob Benson to see about getting on a committee to help young farmers like me,” Martin said.

The young producers, representing 11 states, heard a wide range of presentations in the daylong session, from money matters to animal rights, from shearing to conservation.

Trevor Hall of Arizona Farm Credit Services described his organization and gave a primer on the ins and outs of getting and keeping credit. He also listed sources of grants and funding aimed at helping beginning farmers and ranchers.

During the discussion, the point was raised that it’s difficult for young producers to grow because they have neither the equity nor the credit experience for financing expansion. Older, experienced operators are often given a better rate.

“I’m not going to gouge just because you’re young,” said Hall. “You are our future borrowers and we want to give you the best rate we can.”

He advised the young producers to take a conservative approach to their business.

“Don’t jump into a business you can’t get your arms around. And don’t overvalue your animals,” he said, recommending that they maintain the ability to cover liabilities and watch their liquidity.

Steve Kopperud of Policy Directions Inc., representing the Farm Animal Welfare Coalition, offered the young producers a sobering picture of the animal rights movement and its impact on livestock producers.

“Animal rights in its purist form: No one has a right to exploit an animal for any purpose. The ultimate goal is to take meat out of the diet,” said Kopperud. “Sheep tend to be low on the target list. But if they decide to go after the sheep industry for taking cute, cuddly animals to slaughter, your prices would fall quickly.”

He noted that the Humane Society of the United States, the largest animal rights group with an annual budget of more than $100 million, has animal agriculture dead set in their bull’s eye. Their job is made easier because fewer and fewer people “have a sniff of where their food comes from,” and increasingly the public wants to know whether farm animals are “happy,” cared for and killed in a humane way.

“This is a social issue. You need to assure the public that you are humane, that you are ethical and that you care,” Kopperud advised the young producers. “Your involvement in this issue is critical. You have to be actively involved in ASI and your state associations. You are the ones from whom the message must come.”

To paint a picture of the markets into which the producers will sell their products, Henry Zerby, Ph.D., a professor of animal science at The Ohio State University, cited several major trends that will impact consumption, including urban growth, an aging population, eating on the go and a focus on health.

He noted that today, there are 18 “megacities” in the world, cities with 10 million or more people. By 2050, there will be 400. By 2025, there will be as many consumers over 65 as there are under. With moms making an average of five kid trips a day and with work commutes averaging 30 minutes one way, more meals will be eaten in a car. And despite the fact that the United States has the highest percentage of obese citizens (32.2 percent compared with 22.4 percent in Canada), 80 percent of Americans consider themselves to be health-conscious.

As the consumer profile evolves, producers will need to continue their focus on product attributes like color, flavor, tenderness and appearance, which he said is often underrated but important to consumers. Zerby reminded that there’s a difference between consumers and customers (“Unless you’re direct selling, the packer and buyer is your customer”), and he left the group with this advice:

“Ask the person you’re selling your lamb to what they want. Understand your genetics and understand your markets and match them up.”

To provide the group with an example of how one producer addressed marketing, Reed Anderson of Anderson Ranches Oregon Lamb explained the path that has brought him direct-market success.

Anderson came from a sheep family, but there wasn’t enough ranch to go around.

With money earned from shearing and a high-interest loan (he had no credit) he bought 150 ewes. It took seven years to pay off the loan, but he rented land and a lambing shed and grazed on stubble from grass seed crops.

Anderson said he was pretty happy just running sheep, but in 1996 he attended the National Lamb Feeders Howard Wyman Leadership School, where he met a woman direct marketing to Neiman Ranch. The idea intrigued him, and he ended up buying packing equipment and a refrigerated truck and selling his lamb to grocery stores, starting small so he could figure out how to pack to meet grocer demand.

He’s now at full capacity in his packing plant.

“It’s been a pretty successful deal for our family, not just for the money, but it’s been a lot of fun,” said Anderson. “I do in-store demos and people stop by and thank us for all our hard work. I enjoy every minute of it.”

One way to conserve the business, Cline said, is to control expenses. For example, he reduces his labor costs by feeding his sheep standing corn crops, letting the sheep do the work. And he uses electro-netting fence to conserve pastures and get high forage yield under his intensively managed grazing system with 250 ewes on 320 acres.

As for conserving the business for the next generation, he said, “I know you’re just getting started, but succession planning begins today.”

To conserve rights as a farmer, said Cline, public perception cannot be overlooked.

“Every farmer has a responsibility to have a high regard for the animals’ well being,” he said. “Our neighbors support us and are happy to have us there. We make improvements to their view shed.”

Another revenue option is shearing. Wade Kopren of South Dakota has been shearing 19 years. Today, his six-year-old business, Kopren Sheep Shearing, handles nearly a quarter million head from the Dakotas to Idaho.

“The best way to get started is to attend a shearing school,” said Kopren. He reinforced the value of sorting wool, including separating by micron and avoiding contaminants like straw and poly fibers.

“If we keep our crews professional, we can expect the people we work for to treat us well,” he said.

Co-chair Cubiburu wrapped up the meeting with this comment, “When you go home, don’t forget about us. We build from here. We want your feedback and thoughts for what you’d like to see next year. We hope you got the tools to help you succeed in your business. The whole membership of ASI is excited about your being here today.”