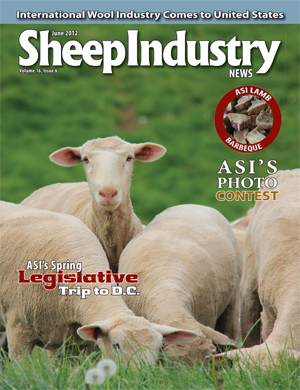 (June 1, 2012) “This is a critical time in American agriculture,” said Deputy Secretary Kathleen Merrigan to the sheep delegation meeting in May with officials from the U.S. Department of Agriculture (USDA). “We need to make a sell to get young people interested in agriculture.”

One of the initiatives of the department – Know Your Farmer, Know Your Food – will receive a refresh in June when the map showing many of the USDA-supported projects and programs related to local and regional food systems will be updated. The new version of the map will incorporate slaughter facilities and capacities.

Merrigan also alluded to a new Farm Service Agency (FSA) program that will be announced for micro lending that will be more constituent friendly.

“We plan to purchase a number of pups, train them up and place them on ranches to defend against wolves and bears,” Clay continued. “They will be fitted with variations of spiked collars to protect them against neck attacks.”

“We thank WS for the protection you offer to the industry,” said Margaret Soulen Hinson, president of the American Sheep Industry Association (ASI). “There is a wide blanket of support for WS as has become evident by the large number of agriculture- and food-production organizations that have signed on to the ASI letter supporting the activities of the agency. More than 150 groups have banned together to support the work of your people.”

“We remain committed to eliminate scrapie in the United States by 2017.” This was the commitment made to the sheep industry by Gregory Parham, DVM, administrator, USDA, APHIS.

Even with another projected decrease in scrapie funding, Parham believes the goal can be achieved by being more efficient and working more closely with the industry. The trajectory of decreased confirmed cases of scrapie along with the certification program shows that this goal can be accomplished.

A case was made to keep the wool lab in Pennsylvania funded for the next fiscal year. The lab is currently being targeted for closure in 2013. It is recognized for its research achievements and for its success in developing commercially applicable products; yet, it is on the closure list.

This announcement is good news for the industry in assisting to move shoulders and legs out of storage and into protein-deficient programs.

The question was raised about the progress of the proposal to approve an increase in collections for the American Lamb Board. The proposal is in the clearance process.

“Our request to you is that you open up at least one substantial export market for the sheep industry before the United States finalizes any additional trade agreements,” said Orwick. “Sheep have not had an export market opened up to them since the 2003 closure when bovine spongiform encephalopathy was detected in the United States in an imported cow.”

Years later, these markets remain closed even after beef trade has resumed. It is the position of the American sheep industry that the United States should open at least one significant export market for American lamb prior to any discussions of lamb imports to the United States under the proposed Trans Pacific Partnership agreement.

“We strongly believe that expanding our sheep producers’ and lamb companies’ ability to market beyond North America would be an appropriate policy of the U.S. government,” concluded Orwick.

Brandon Willis of Secretary Tom Vilsack’s office reviewed the Farm Bill as approved by the U.S. Senate as applicable to the sheep industry.

The Livestock Forage Program (LFP), which put $2.2 million into the sheep industry over the last five years, has been extended for an additional 10 years. The recommended payment rate will be reduced from 60 percent to 50 percent.

Also extended is the Livestock Indemnity Program (LIP). This program put $13 million over the life of the Farm Bill into the sheep industry. The indemnity will be decreased from 75 percent to 65 percent of the value of the sheep but will now cover deaths incurred by federally protected animals.

“Since there is likely to be a lapse in the rules for these two programs, it will be critical for producers to keep detailed records during this time,” said Willis. “The program will probably come back to cover the lapse but records will still be required.”

Juan Garcia, deputy administrator for farm programs, USDA, Farm Service Agency, reiterated the fact that LFP and LIP payments could be retroactive so detailed record keeping will be very important.

Producers expressed their concern with the difficulty of abiding by the current rules for reporting losses for the LIP. The department was encouraged to write rules that the range-lambing operations can meet eligibility requirements as it is nearly impossible for most operations today.