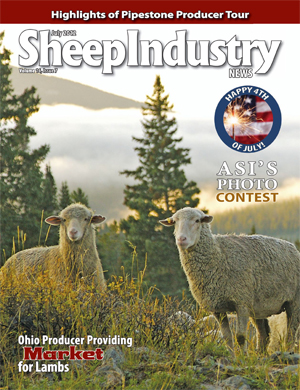 The Sheep and Goat Research Journal has been a valuable tool for sheep producers since the mid-1980s. Once a journal that was only published periodically, it is now an online forum for current scientific, peer-reviewed information that is ready to be utilized in the field by sheep producers. This immediate access to scientific information was the work of Lowell Slyter, Ph.D., of Aurora, S.D., who served as the editor of the journal until March of this year.

With the move to become a strictly online publication in 2005, now located at www.sheepusa.org , information in the Sheep and Goat Research Journal is just a few clicks away for U.S. sheep producers and industry affiliates.

The position of editor has changed hands a number of times through the last 28 years of its existence, and at one time the journal was a subscription-only publication. Making the information in the journal available to all producers free of charge was one of the stipulations of Slyter taking over as editor.

“The research journal has always been designed to provide a place for public work that is ready for practical application,” explains Slyter, commenting that other journals were so scientific that the lay person wouldn’t read them and would have a hard time understanding them if they did. “Now once the articles have gone through the peer-review process, they are published as soon as possible.”

Slyter is no stranger to the sheep business. He grew up on a diversified farm, which included sheep, and has been involved with sheep in one way or another since then.
His past work aimed at finding new ways to improve the industry includes employment at the University of Nebraska and Kansas State University.

Most notably, Slyter was a professor at South Dakota State University (SDSU) for 31 years, where he taught and researched sheep production principles and reproductive physiology, as well as coached the wool judging team for 20 plus years. It was often commented that Slyter was among the very best teachers in the department as evidenced by him consistently being listed as a top instructor in the College of Agriculture and Biological Sciences at SDSU.

Through his years at SDSU, Slyter was an active and productive researcher. He authored or co-authored 21 peer-reviewed journal articles, 27 abstracts of research findings presented at scientific meetings, 88 field day reports and bulletins and three book chapters. Specifically, his research on out-of-season lambing is widely quoted and used by many producers throughout the United States and abroad. He was also active in the scientific community and served on many committees. For the past eight years his work in the sheep industry has continued by serving as editor of the Sheep and Goat Research Journal.

Slyter’s work in the industry was recognized by him being named the Honored Agriculturalist for the 2011 Little International at SDSU.

“ASI was extremely fortunate to have someone of Lowell’s caliber and experience working with us to produce this journal. His attention to detail and insistence on accepting only quality research have made the publication a valuable, trustworthy tool for academia and the industry,” says Peter Orwick, American Sheep Industry Association (ASI) executive director.

Taking the editor reins is now Keith Inskeep, Ph.D, of West Virginia University, who says he has been in training for a role such as this for the past 50 years. Inskeep has been the co-author of numerous research reports and review papers published in journals, as well as some book chapters. He has served as section editor for physiology for the Journal of Animal Science, was on the editorial board of a number of journals and has reviewed submitted papers for at least 15 journals. Like Slyter, Inskeep grew up on a diversified farm that included sheep, and they have always been a part of his work.

Slyter says that he is happy to have Inskeep on board. The two have been working together over the past couple months on transitioning the role.

“I have enjoyed my time as editor,” says Slyter. “It has been a way for me to stay current with what’s going on in the industry and kept me involved with researchers.”

“I view being asked to take the editor role as a huge honor and responsibility. I have been thinking about how to maintain and grow the journal, and how to make it more valuable to more readers,” says Inskeep.

For the journal, Inskeep accepts research-based submissions on a wide variety of topics that advance the American sheep and goat industries in the realm of production and marketing which plays right into ASI’s initiative of growing the national flock.

The journal is open to a broad range of research, as long as it is based on sound science. More importantly, the research in the journal has to be able to be understood and readily used by producers and other industry affiliates, such as scientists, extension agents and educators.

Although Inskeep doesn’t plan on making any big changes to the journal, he has initiated an effort to publish the papers from the genetics symposium at the ASI convention in January.

“Those papers need to reach a larger audience than the attendees at the conference,” he says. “Adoption of performance testing has lagged in the sheep industry and there has been too much dependence on the show ring to evaluate quality animals. Chase Hibbard and John Helle illustrated the evolution and value of performance records on key traits in their papers.”

In addition to encouraging everyone to check out the journal, he says he is always looking for submissions that are based on sound science. He also encourages researchers to do their part in finding data that will help keep the U.S. sheep industry viable.

“Dr. Slyter has set a tremendous example as editor. He has encouraged quality submissions, set firm standards for scientific quality and readability and expanded the breadth of topics covered,” says Inskeep.

The most recent research findings in the Sheep and Goat Research Journal, as well as archived issues, can be located at www.sheepusa.org.

To learn more about submitting research manuscripts to the journal, visit this page to download a copy of author guidelines.