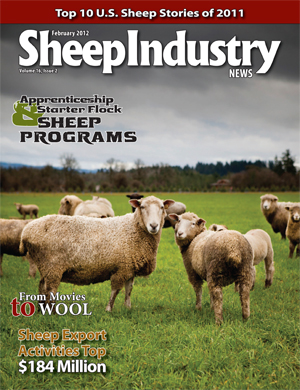 (February 1, 2012) The farmgate value of the U.S. sheep industry in 2010 was an estimated $487 million yet its benefit to the U.S. economy doesn’t stop there. Through multiplier effects, sheep production stimulates demand and thus income in backward- and forward-linked industries. Sheep and sheep product exports also incite domestic production and employment, but this impact was largely unknown until recently. In December, a study, completed by Julie Stepanek Shiflett with Juniper Economic Consulting, was released that determines the total economic impact of the sheep industry export activity.

Sheep exports stem from lamb, mutton, wool, lambskin and live sheep exports. The farmgate value of these exports was an estimated $50.5 million in 2010, with greasy wool exports at $18.4 million, accounting for the most significant export commodity. But the effects of these exports don’t stop at the farmgate, to get the true impact of the sheep industry’s exports, Shiflett also estimated the impact on indirect, or backward-linked, industries and the impact of sheep-producer spending due to export sales.

Wool Exports
Due to American wool’s diverse micron range, it is suitable for a wide variety of products including fine worsted suiting, knitwear, woolen coatings, upholstery, bedding materials, mattresses comforters and industry products. In 2010, the amount of wool that was exported was 14.4 million pounds, or 62 percent of the total wool production.

The farmgate value of greasy wool production was $35.2 million – at an average $1.27 per pound – of which $18.4 million was exported. In addition, the U.S. exported an additional $48.7 million of value-added wool products in 2010, which includes wool tops, combed yarn and woven wool fabric. The impact of these value-added wool exports to the producer was $11.5 million.

“The sheep industry is experiencing profitable times and wool exports have certainly helped growers realize this.  Before 15-years ago, not much raw wool was exported and now greasy wool makes up the largest farmgate value of sheep exports.  There are many international buyers interested in U.S. wool and, in recent years, more wool could have been sold, due to the high demand,” explains Rita Kourlis Samuelson, American Sheep Industry Association wool marketing director.

Export Contribution
The U.S. sheep industry contributes to the U.S. economy beyond just the value of its exports. In order to estimate the impact from industry exports, the value of exported sheep products must be known as well as its multipliers. Multipliers measure the strength of ripple effects that can occur in an economy from $1 of production. Thus, the more inputs purchased locally and the more consumers shop at local shops, the high the multiplier. To calculate this figure, Shiflett used the IMPLAN economic impact modeling system.

Thus, every dollar of exports generated by the sheep industry produces $1.80 in backward-linked industries. Additionally, sheep producers are also consumers. For every $1 of sheep exports, sheep producers spend their income eating out and buying trucks, generating an additional $0.84 in the U.S. economy. And as far as creating jobs, one sheep exporter stimulates another one half-time job in backward-linked industries and a quarter-time job to sheep-producer spending.

To read the Export Contribution by the U.S. Sheep Industry Report in its entirety, visit  www.sheepusa.org/Publications .