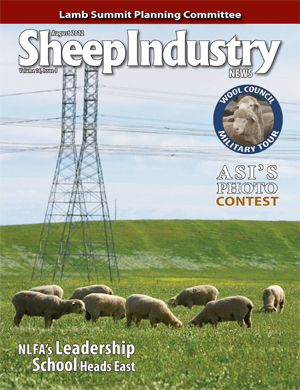 (August 1, 2012) The American Lamb Board (ALB) in July convened a conference call of leaders from national and state associations representing sheep producers and feeders, as well as several lamb company officials, to discuss plans for a potential summit on this year’s lamb market situation. The concept of a summit for all lamb-industry segments to discuss lamb market issues from price volatility to the current back log in slaughter lambs and quality topics is being spearheaded by the California Wool Growers Association.

California is typically the first state with new crop lambs going to market in a calendar year and, thus, the first to be subjected to markets that have retreated from the record highs of 2011 to the prices of the year prior.

Much of the conversation about the market is that lamb prices are too low, meat prices are too high and slaughter lambs being too large. Confidence on where lambs will go is mixed.

A review of 2011 reveals that producers experienced the highest lamb prices in history. High lamb prices were passed on to the retailers who absorbed the increase for a while and then moved to raise retail lamb prices in the fall of 2011, normally a heavy time for lamb sales.

This year, 2012, represents the first time in a decade that market prices have dropped year-on-year. Packers are claiming the volume of sales is down but have been hesitant to lower prices much in an effort to try to move product.

According to American Sheep Industry Association (ASI) participants on the call this week, the planning committee is setting a meeting in the coming weeks to decide on a direction of either a lamb summit or a taskforce to work on industry responses to lamb issues that will then be reported back to an industry-wide summit.

A recap of the government-affairs projects that ASI, as a trade association, is involved with include the Livestock Risk Protection-Lamb (LRP-Lamb) and the Let’s Grow initiatives.

Sept. 17, 2007, marked the first sale date for the LRP-Lamb insurance product. LRP-Lamb is designed to insure against unexpected declines in the price of slaughter lambs.

The impetus behind the Let’s Grow programs is a strategy to strengthen the lamb and wool industry’s infrastructure by increasing the number of sheep in production for the long-term sustainability of the industry.

ASI has also led the way with several additional lamb-related initiatives including a letter to Congress and to the livestock and meat groups in May supporting the U.S. Department of Agriculture’s (USDA) analysis and update of Mandatory Price Reporting for lamb.

Understanding that these price reports affect the industry’s ability to offer LRP-Lamb sales, ASI has been very aggressive in helping to see that price reports are available by working with the trade and with USDA.

Also in May, ASI secured an Agriculture Marketing Service announcement of a $2 million commodity purchase program for lamb leg roasts and lamb shoulder chops that could equate to 18 semi loads of lamb meat. The intent of this program is to strengthen lamb prices to the farm and ranch level. Purchase announcements will be made on Friday, July 27, with deliveries taking place in September.

ASI has been meeting with the U.S. Congress, USDA and with the U.S. trade representative pushing for them to open at least one significant export market for American lamb prior to any discussions of lamb imports into the United States under the proposed Trans-Pacific Partnership trade agreement. Lamb companies showed an interest in opening export markets in Japan, China, Taiwan, Russia and the European Union.