A Dose of Selenium that Goes a Long Way 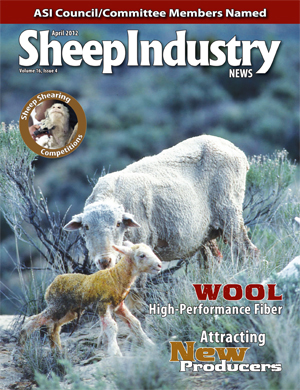 A Dose of Selenium that Goes a Long Way

(April 1, 2012) In western parts of the United States where some rugged ranges can only be reached by horseback, ranchers often find themselves saddling up weekly to deliver mineral supplements to livestock grazing in nutrient-deficient regions, especially areas scarce in selenium. The routine is not only time-consuming but also costly, and in some leased-land arrangements, such supplementation practices are prohibited.

Selenium, a trace mineral and component of important selenoprotein antioxidants, is essential for good health in livestock and humans. If the body cannot form these important antioxidant proteins, it predisposes the animal to sickness and eventually death at a young age.

Which Selenium Is Best?
In search of a more cost-effective and longer-lasting supplement, scientists at the Agricultural Research Service’s U.S. Sheep Experiment Station (USSES) near Dubois, Idaho, and at North Dakota State University (NDSU), in Fargo, isolated a selenium-rich coproduct of milling high-selenium wheat and studied its effects on ewes and their lambs.

The most common form of selenium supplement is sodium selenite, which is usually added to salt-based mineral mixes fed to grazing livestock. Sodium selenite is inexpensive, but it doesn’t last long in the body, says USSES animal scientist Bret Taylor, so it must be provided frequently to animals living in selenium-deficient regions.

“To provide enough of these mineral mixes to a band of sheep—around 1,000 ewes and their lambs—grazing remote areas, it would take a lot of horses to carry the supplement and supplies,” says Greg Lewis, USSES research leader. “That’s because sheep can consume a lot during the week.”

In a study by Taylor, the wheat coproduct, which is rich in a different form of selenium—selenomethionine, was included in the diets fed to some ewes during their last 40 to 50 days of pregnancy. The coproduct, derived from high-selenium wheat harvested in South Dakota, was fed at levels providing 10 times the daily selenium requirement.

Ewes passed the supplemental selenium to their fetuses during pregnancy and to their nursing offspring through their milk.

Because the coproduct was rich in longer-lasting selenomethionine, the selenium status of these ewes remained adequate six- to 10-times longer than that of ewes fed supplemental sodium selenite during pregnancy, Taylor says. Ewes did not need any additional supplements until they returned for lambing the following year.

“All of the costs involved with delivering supplements on a frequent basis year round are eliminated with this type of feeding strategy,” Lewis says. “We’re really talking about only one time a year.”

Two for the Price of One
Scientists discovered that the best time to feed ewes a diet rich in selenomethionine is when they are lactating. That’s because lactating animals consume more feed, and thus, will consume more of the product, Taylor says. Furthermore, selenium consumed by the dam will pass to the nursing young through the milk.

In one of the experiments, ewes that had given birth to twin lambs were divided into two groups. Each ewe was housed with its lambs only. One group was fed a regular diet containing the standard sodium selenite at the recommended daily amount, and the other was fed a diet that included the selenium-rich coproduct providing selenium at nine times the daily requirement.

“What’s unique is that during the first 19 days of their lives, the lambs were only allowed to consume milk from their dams,” Taylor says. “Not only did the selenium-rich coproduct from wheat enhance the selenium status of the ewe, it enriched the milk with selenium, which was subsequently passed to the lamb.”

Making the Most of Milk Production
In another study, colostrum and milk production were measured in ewes that were fed either a diet containing the selenium-rich coproduct or a basal diet supplying selenium requirements. Within each selenium treatment, ewes were fed either 60, 100 or 140 percent of their daily energy and protein requirements throughout pregnancy. At birth, treatments were stopped, lambs were raised separately from their mothers, and ewes were machine-milked twice daily for 20 days.

“There was less butterfat in terms of percentage. But because ewes produced so much more colostrum, 540 grams vs. 390 grams, they were able to provide their offspring a lot more total grams of butterfat,” Caton says. “The colostrum was more dilute, but because there was so much more of it, there were a lot more nutrients going to that offspring.”

Scientists also addressed nutrient restrictions of rangeland sheep. They examined how limited nutrition and high levels of dietary selenium during pregnancy affect growth of adolescent ewes and their lambs.

Adding the selenium coproduct feed to diets of pregnant ewes appears to enhance weight gains and body composition, says Allison Meyer, a former NDSU doctoral student who is now an assistant professor of animal science at the University of Wyoming.

“The birth weight of lambs was reduced by low-nutrition diets. But when ewes were also fed the coproduct diet, their lambs had a greater birth weight,” Meyer says.

Load and Go
Selenium deficiency is a soil issue, especially in the West where many of the soils are a little too acidic, Taylor says. Either selenium is not present or it exists in a form that the plants can’t absorb.

“Because the selenium in the vegetation is so low, animals can’t meet their daily selenium requirement,” he adds. “They just can’t eat enough plants in 24 hours to get what they really need.”

“With the new program, sheep can be fed the selenium-rich coproduct diet before being released to graze selenium-deficient range,” Taylor says. “We can load sheep with selenium from the natural coproduct feed before they go, and they’ll have plenty in their system to meet their selenium needs.”