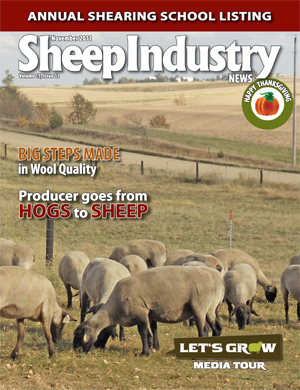 (November 1, 2011)  In these tough economic times, many universities are looking at cutting their budgets and often on the chopping block are agriculture research and extension programs. Of those, the scale backs often hit some of the smaller programs, and unfortunately in some university systems, this has meant cutting the small ruminant programs.

However, one state has become a model of how strong state sheep association and producer involvement with legislators and decision makers, in addition to supportive university administrators, can keep and build a strong sheep education, extension and research program.

North Dakota is home to a strong collaborative effort between the administrators and staff of North Dakota State University (NDSU) and the North Dakota Lamb and Wool Producers Association (NDLWPA). Association members were instrumental in saving the program when it was up for cut and continue to be an integral part of the sheep program at the university – it’s a model other state association’s facing the loss of sheep programs could learn from.

Producers Instrumental to Sheep Programs
“The producer voice is the number one reason why we have a very active and vibrant sheep program,” relates Greg Lardy, Ph.D., head of NDSU Animal Science Department.
Today, the sheep program at NDSU fulfills its goal of education, extension and research through its program at the Fargo, N.D., campus and the NDSU Hettinger Research Extension Center, which boasts a 1,200 ewe flock used for industry-relevant research and outreach purposes.

However, in the early 2000s, the program, and specifically the state sheep specialist position  was in danger of losing funding, and the state sheep producers came together to lend their support in a big way.

“When we were in danger of losing that position several years ago, the industry stepped forward. They are still critical to maintaining our funding today,” says Lardy.

“The room had about a capacity of 90, and we had 90 producers in the room,” says Pfliger. “We spoke on saving the program and focused on the added value of sheep production. Diversifying our ag is what we called it.”

“There were lots of phone calls, lots of talking with people that were influential in the system and telling them how important the program is for us,” says Dean Swenson, North Dakota’s ASI director, who was active in saving the program and stays active now working with the university to guide the program. “It was just a lot of contact. We don’t take anything for granted. You can’t be apathetic while they close sheep programs down, you have to keep after them, you have to show the impacts on students and how our whole industry depends on the program and how it impacts the whole economy.”

The message the producers brought to the table worked. Today, the sheep program at NDSU is going strong, focusing on both education and research that is relevant to the state’s sheep industry, all while including producers on various hiring committees and boards to voice the needs of the industry.

“I was fortunate enough to serve on the selection committee for Reid. We have had producers involved on all the selections, be it the extension specialist or shepherd positions,” says Swenson. “It was a good learning experience. You have guys with Ph.D.s and a producer on the board.”

Redden’s position requires him to perform 50-percent extension, 35-percent research and 15-percent teaching, entirely focused on sheep. A highlight of the position he says is bringing the sheep industry to the NDSU students, about 100 this past year, in sheep production classes.

“Talking about the sheep industry is a highlight. It shows the lamb and wool producers that the young people are interested in the industry,” he adds.

Swenson says he has firsthand experience with this, as he volunteered to work with students as part of a NDSU sheep-based class project that allowed students to meet with producers and learn about issues of their operation first hand.

“I did this a couple of times. A group of students would get ahold of you and come out to the farm and learn about your issues. Then they would brainstorm and work on suggestions for improvements. They are getting real-world experience in the industry, and those kinds of programs also keep producers involved with the community,” he relates.

According to Lardy, the sheep program also works closely with a focus group of producers for ideas of research and education topics.

“They have a pretty strong say in what we do as a university,” Lardy relates.

According to Christopher Schauer, Ph.D., animal scientist and director of the NDSU Hettinger Research Extension Center, which also serves to educate both students and growers, producers are instrumental in providing research topics that are relevant to the industry, as well.

“NDSU has an excellent college of agriculture structure, from our regional livestock producers all the way through to the vice president of agriculture and the president of the university. Our advisory board is driven at a grassroots level and that message resonates across the state, resulting in support for the sheep industry from all levels of administration. There are sheep producers on our advisory board, but every producer has a hand in research,” he says. “If you embrace the sheep industry, they will embrace you back.”

Collaboration is Key
Collaboration between the many entities that influence the sheep program has been the key to its success, says Lardy.

“Our central administration understands the value of the diversity of livestock programs. It knows we are not going to have a program of excellence if it’s specifically a one-commodity program,” he says. “People like Chris Schauer and Reid Redden are doing a great job engaging youth and working with our producer groups, and we have producers that are very active and very interested in maintaining sheep programs. I think a key point for a lot of these agriculture industry issues is stronger collaboration between university partners and producers. Producers and associations need to really get engaged with what’s going on with their universities and work with stakeholders to keep programs going and support the university,” says Lardy.

He also adds that universities have to ensure their programs are relevant to the stakeholders, and worth the funding, in order to stay up and running, and they cannot do this without producers’ active input and support.

“The key in North Dakota has been producers stepping up and making sure their voices are heard by legislators and decision makers,” he says.

Swenson agrees and urges other associations to become as active as possible with their university systems to preserve remaining sheep programs instead of being passive observers when cuts are threatened.

“If you want a sheep program, you have to work hard to keep it,” says Swenson. “We have a lot of members who have worked hard, and we’ve pushed hard as an association to keep the sheep program going, both in Hettinger and Fargo. It takes a lot of commitment.”