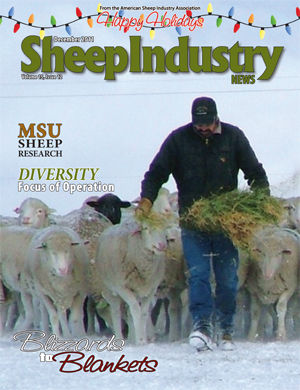 “We have been really encouraged by the number of media representatives and local producers present at the events,” says Peter Orwick, ASI executive director. “The local producers have done an excellent job of communicating the goals of the Let’s Grow initiative resulting in a great deal of positive press for the industry.”

The Ohio event was hosted at Riverwood Farms in Powell, with Rocky Black, deputy director of the Ohio Department of Agriculture (ODA), the distinguished guest.

“The ODA definitely supports the concept of expanding the sheep industry,” Black explained during an interview at the event with the Brownfield Network. “As we look at the economies in Ohio, Michigan, Indiana and other states, we always fall back to the stability and vibrancy of the ag economy. Rather than chasing a new phenomenon, sometimes we need to look back and remember what our bread and butter is. In Ohio, that’s the livestock industry, and the sheep industry has been a backbone for us.”

Roger High, executive director of the Ohio Sheep Improvement Association, announced the development of an apprenticeship program. The concept of this program is that once new producers complete it, they will possess the knowledge base to raise sheep on their own.

In Indiana, the media event was hosted by Stan, Carol and Stanley Poe of Franklin. In addition to Orwick, Bob Benson, ASI executive board member, represented the national effort.

Addressing the media, Stan said sheep producers in Indiana are sitting on a tremendous opportunity to expand sheep numbers due to the increase of the Mexican and Muslim populations entering the state.

“I have never been more enthusiastic about the sheep industry in Indiana,” he says.

More photographs from these events are available on ASI’s Facebook page, and articles that have been published about the initiative have been posted to www.growourflock.org under Flock Talk.

A media event was held in Tennesse on Nov. 15 and California will play host to one in December.